By Abbey Palmer
0 Comments
A Southland man feared what he would find as he walked up to a car after it went flying into a traffic light yesterday.

The man, who wished to remain anonymous, was on his way to work when he saw the two-vehicle collision, at the intersection of Bay and North Rds in Invercargill, about 9am.

He pulled into a business next to the south-bound lane before checking the occupants of both vehicles were safe.

"I didn’t go into shock or anything like that.

"It was more like ‘what am I going to find when I look in the car?’" 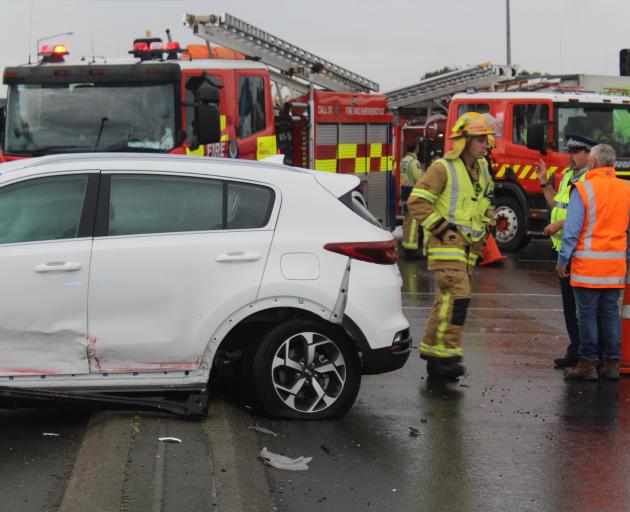 Firefighters redirect traffic at the corner of Bay and North Rds after a car spun into a traffic light following a two-vehicle collision in Invercargill yesterday. PHOTO: ABBEY PALMER
Luckily, as he parked, the driver who had hit the traffic light got out of the vehicle.

That is when the man called police for assistance.

A police spokeswoman confirmed officers were alerted to the crash and Fire and Emergency New Zealand personnel were present to direct traffic away from the busy thoroughfare.

North Rd is the main access from the north to the Invercargill city centre.

At the scene, an SUV had come to a halt on an island which separates five lanes.

Beside it lay the traffic light.

Car debris was spread across the road.

Another damaged vehicle, understood to have been clipped during the crash, was parked on the side of the road near the northbound lane.

Police were speaking to the occupants of the crashed car, who appeared visibly shaken.

Traffic management remained in place until the road was cleared and the traffic light repaired.