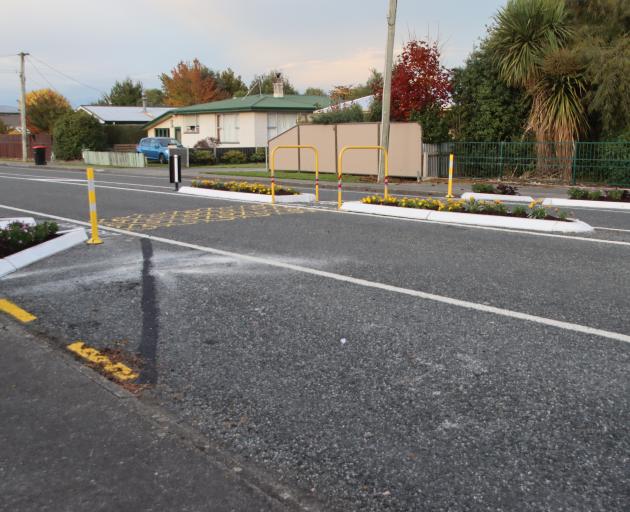 A courtesy crossing in Broughton St has been transformed into what it could look like as a permanent installation with a refuge island and bulbous kerbs. PHOTO: SANDY EGGLESTON
The continued vandalism of concrete planters in Gore is "beyond a joke" a council staffer says.

In the past two weekends, 46 concrete planters which were installed as part of the Gore District Council’s Streets Alive project, had been vandalised.

Gore district roading asset manager Peter Standring said the continued vandalism of the concrete planters was getting to the point where the vandals were endangering people by moving them on to the road or footpaths.

"It is beyond a joke.

"It’s not only the wanton destruction of public property, but also quite demoralising for our staff and contractors to have to spend every weekend putting things back in place."

The continued vandalism had prompted the council to replace the planters in Broughton St with a courtesy crossing, including a temporary refuge island and bulbous kerbs, to show residents what permanent installations could look like.

"Everything about Streets Alive is up for discussion," Mr Standring said.

"Public feedback will be a major influence in what, if anything, becomes permanent."

The planters around town were temporary structures to trial where permanent solutions might be placed.

"Unfortunately, it seems a lot of people are worried the planters are permanent.

"I can assure the community that’s certainly not the case.

"The planters will be removed at the end of the trials and solutions, such as the refuge island and bulbous kerbs created in Broughton St, could be installed if that’s the feedback we get," he said.

The results of the survey asking people for their initial impressions of the Streets Alive trials, completed last month, will be presented at the Gore District Council meeting on May 11.

Maybe it is time for the council to listen rather than take the arrogant stance they have so far.

Have heard that if the trial is not completed the GDC - (Ratepayers) will have to repay back to NZTA the $900K. Seems to me that Central Govt and Local Govt no longer adhere to being fiscally responsible. Controlled "communitarianism" at its very worst!