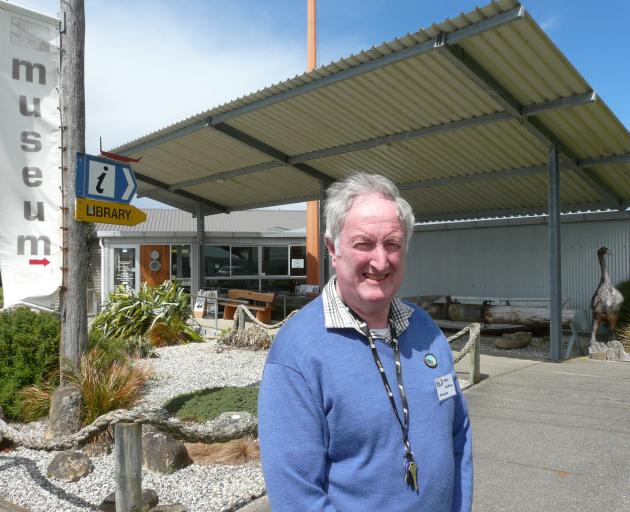 Owaka Museum manager Mike McPhee is expecting another busy season for volunteer staff at the combined museum and information centre. PHOTO: RICHARD DAVISON
A proposal to seek full i-Site status for the Catlins Information Centre will not be actioned in time for summer.

The proposal was considered by the Clutha District Council's corporate services committee in June, but shelved until its Destination Strategy could be completed by economic development agency Clutha Development.

Yesterday, a council spokeswoman said that strategy remained pending, and would not be finalised until long-term planning occurred next year.

At present the information centre - located in the Owaka Museum - employs a single staff member during the week.

They are supported at weekends and public holidays by more than 35 volunteer staff working in the visitor information centre and museum.

"I can see the benefits of becoming an i-Site, which would allow us to operate a full tourism booking service and generate revenue.

"It would also take some of the pressure off our volunteers, as I understand there would be some form of seven-day paid staffing of the centre.''

However, he said volunteers - who were "highly valued'' for their local knowledge and enthusiasm - would still be required, as the centre and museum were "flat-out'' during summer.

"We're bucking the downward [visitor] trends elsewhere in the district and seeing 20,000 people a year at present.

"Of those, 5000 visit the museum, and the other 15,000 are a mix of council service centre and visitor information centre customers.

"We expect continued growth, so even though additional paid staffing would be fantastic, we'd still need our volunteers.''

The council said any increase in staffing would be addressed irrespective of eventual i-Site status, although it was unlikely to occur in the short term.

"The key message [is] not to expect any changes this summer.''