By Abbey Palmer
0 Comments
The only thing missing from a transformed Invercargill school garden is chickens.

And they are coming.

From bee havens to tomato-filled tunnel houses, herbs galore and blossoming fruit trees, Aurora College’s Garden Club has turned an almost empty plot of land on their grounds into a plethora of flora and fauna. 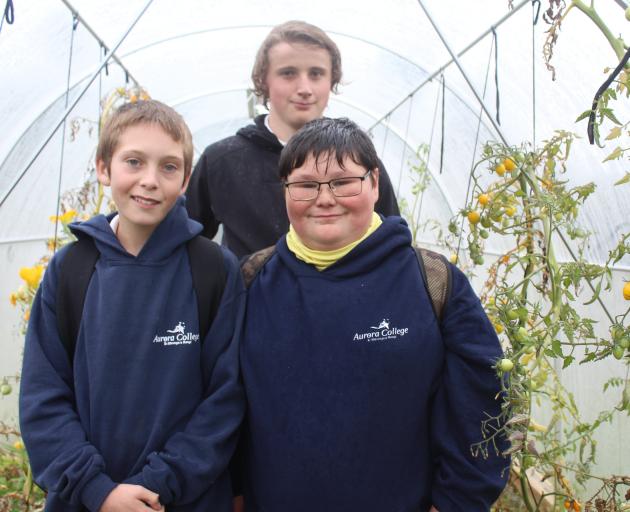 Aurora College pupils (from left) Ashton Gregory-Hunt (13), Carl Hollis (15) and Danny Mortimore (13) in their tomato-filled tunnel house in the school garden they helped build. PHOTO: ABBEY PALMER
Pupil Danny Mortimore, who was one of the garden’s project managers, spent lunchtimes and after school helping out with the labour side of things and planting whatever he could get his hands on.

"We rebuilt the chicken coop for when we get some.

"All of our flowers and produce leftovers go to the principal and then she gives them to people who are less fortunate."

Year 9 home base teacher Jacqueline Stewart said it had taken a year to get to where the pupils were with the garden, and people would not believe what it looked like initially.

Not only had they planted it all, they also built it from the ground up.

The project was made possible with the help of the wider community and school whanau, and more than $400 worth of fruit trees and plenty of seedlings had been given by various donors.

"It’s definitely helped grow our relationships with our community and got people to question how they get their food and where it comes from," she said.

Sustainable practices were something the school wanted to be included in the pupils’ education.

In turn, their families had learnt a lot too.

"The kids have just been blown away by what their seedlings have turned into," she said.

Those with special needs had also benefited from the project, by helping grow and maintain the gardens, as well as cook with the ingredients regularly.

As for plans for the future, the aim was to line the perimeter with bee gardens and fill any "dead space" to beautify the grounds even further.