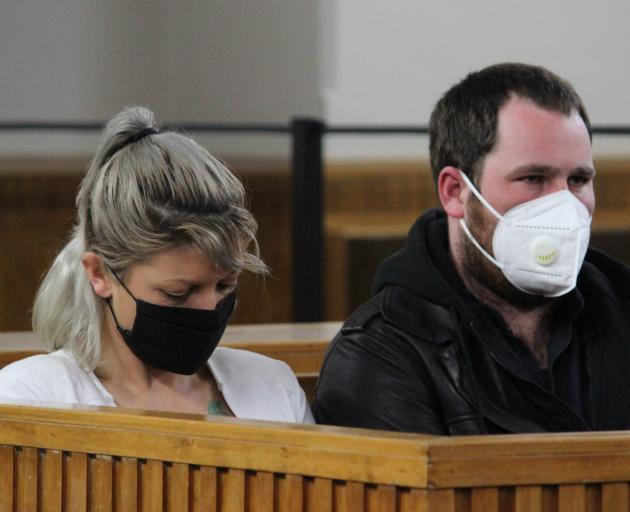 Accused murderer Sandy Graham, and the man accused of being accessory after the fact, George Hyde, sit in the dock at the High Court in Invercargill at the beginning of the trial earlier this month. PHOTO: ODT FILES
A person could fire a bullet from a rifle similar to that used to kill Dale Watene, without a magazine inserted and without them knowing it was loaded, jurors heard during a murder trial yesterday.

Giving evidence for the Crown yesterday, police armourer Daniel Millar said he was sent a Ruger 10/22 long rifle by scientists to test the trigger pressure, check if it was zeroed, determine the make and model, and whether it had been modified.

It is the firearm police believed had been used to kill Dale Watene at Otautau on April 16.

Evidence given last week said Mr Watene died of one shot into the mouth which lodged in the top of his spinal cord.

At the start of the trial, Graham’s defence lawyer admitted Mr Watene had been shot but
that it was an accident, neither done on purpose nor with murderous intent.

The jury trial before Justice Nation in the High Court at Invercargill entered its third week yesterday.

Mr Millar said testing of the firearm showed it was in good working condition but shot slightly high.

Under cross-examination by Graham’s defence lawyer, Philip Shamy, Mr Millar explained that if there was a bullet in the breach block and someone pulled the lever/cocking handle first, the bullet would be ejected without firing.

If the bullet was in the breach block and someone pulled the trigger, then the bullet would be fired.

Mr Millar said yes when Mr Shamy when asked whether that was why it was important firearms were checked before shooting and before being put away.

Crown witness Institute of Environmental Science and Research forensic scientist Gary Gillespie gave evidence regarding the scenes he examined as part of the police investigation between May 6 and 8.

Luminol testing revealed there was a concentration of blood in the hallway of Graham’s address between a child’s toy box and child’s sofa seat.

Wider white lines revealed in luminol testing in the living room and hallway showed areas which could indicate areas that had been cleaned, he said.

Under cross examination by Graham’s defence lawyer Sarah Saunderson-Warner, Mr Gillespie was asked if there was enough physical evidence which could show where Mr Watene was shot or how he was shot.

Mr Gillespie said there was not enough evidence or data to show where he was shot but could not say whether or not there was enough to show how.

DNA samples were taken from bloodstained areas and only one showed Mr Watene’s DNA.

Recordings were played of intercepted phone calls and conversations recorded from surveillance in the garage and living room of Graham’s house as well as the motel she stayed at while police searched her house in early May, 2020.

In one conversation on May 21, her former partner, Joshua Kingipotiki, rings her to tell her police have found the body of Dale Watene.

In another conversation, a woman asks her if Mr Watene died at her house.

Later Graham tells her she is not a killer.