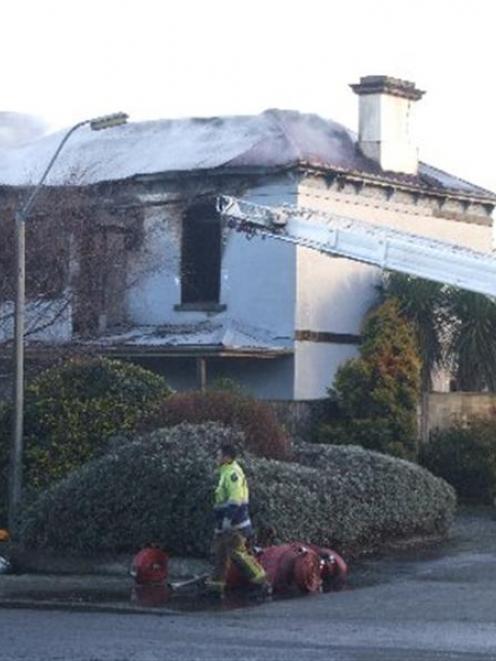 Firefighters work on the remains of the Road Knights' Invercargill headquarters destroyed in a suspicious fire yesterday.
Invercargill Mayor Tim Shadbolt will call a special meeting with police to discuss the gang situation in the city after a suspicious blaze gutted one gang headquarters yesterday and police stormed a second, arresting four people.

The heavily fortified headquarters of Invercargill's chapter of motorcycle gang the Road Knights was destroyed in the blaze yesterday.

Four members of the Mongrel Mob were later arrested after police raided the gang's headquarters in South Invercargill.

Police declined to say whether the incidents were linked.

A witness told the Otago Daily Times she heard chanting outside the Road Knights' Balmoral Dr property shortly before 7am.

She called emergency services, as fire engulfed the top floor.

"There was no-one else around. The people who were chanting were gone by the time I looked at the house."

They were "doing the same kind of chants".

Southern fire region assistant commander Brendan Nally said the city's five fire crews, including up to 28 firefighters, were sent to the blaze.

They found one man asleep in a downstairs bedroom.

He was taken to safety through a window and treated by St John ambulance staff.

"If that guy was in there another five minutes, he would have been in big trouble," Mr Nally said.

Some Road Knights members had returned to the house by that stage, concerned two of their motorcycles were still inside the house, Mr Nally said.

Firefighters recovered "a rather nice-looking red Ducati", but were unable to locate a second one.

Senior Sergeant Olaf Jensen, of Invercargill, said this followed "items of interest" being found inside the compound.

Four men will appear in the Invercargill District Court today. Police declined to reveal the charges they faced.

Gang members were earlier seen burning a motorcycle thought to have belonged to the Road Knights, TV3 reported.

The Mongrel Mob, which has a relatively low public presence in Southland, has become more prominent after police raided the gang's Invercargill headquarters this month following reports gang associates had been trying to purchase pseudo-ephedrine-based products.

Invercargill chapter president Shaun Newton-Te Kahu went public after the searches, saying the chapter wanted to change direction, work on a better future for its families and move away from its violent past.

Members have surrendered firearms and weapons to police in the past week.

Mr Shadbolt said yesterday's activities were a serious concern because they could lead to retaliation from either side.

"Sometimes, it is difficult to calm these things down."

Invercargill gangs had been "very settled" for a long time and there had been no indication things would escalate.