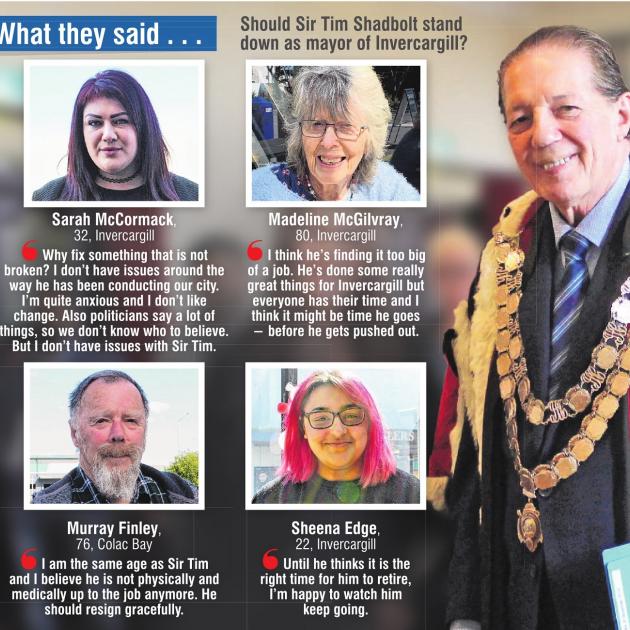 Questions about Sir Tim’s performance appear to have dented his once commanding popularity among the people.

The Otago Daily Times took to Invercargill’s streets yesterday to ask people how they felt about Sir Tim’s mayoralty.

Questions were raised following comments by departing deputy mayor Toni Biddle and fellow councillors Rebecca Amundsen and Alex Crackett, who also said they thought Sir Tim was no longer fit for the job and he should step down.

"There is certainly a lot more critical assessment of the situation than it was before. Not just — I guess — a blind following of Tim."

Of the 50 people asked yesterday whether they thought Sir Tim should resign, 64% (32) said yes.

Invercargill resident Gordon Sinclair, who voted for Sir Tim in the last election, said he would not do the same if he stood for mayor again in 2022.

"He can’t keep up. He’s not keeping up with the digital age either.

"Being a mayor is like being a CEO of a company; you need to be on top of things, but the time has come [for him to retire]."

Dona Mooson, of Invercargill, agreed and she said that it was "time to make some space for fresh blood".

Of the 28 people in the sample who voted for Sir Tim in last year’s local body election, just over half would vote for him again in the next election.

Jill Helm, of Invercargill, was one of those.

"A lot people are saying he is physically past it and if this is true, it’s quite sad — but I like him. He’s done a lot for the city ... If he believes he is capable of it, I believe in him as well."

A quarter of people asked were undecided, including Joshua Payne, of Invercargill.

"I think it would be appropriate to create a new role for him, like an adviser role, so that way he would still be a part of our city, share his knowledge but with less responsibilities."

Two people who did not vote for him last time said they would in the future.

Last month, president Neil McAra sent a letter, on behalf of the chamber’s board, to Sir Tim and councillors asking them to consider further consultation with the wider community as part of their DIA review.

Mrs Carey said Cr Biddle’s resignation offered an opportunity for a by-election and with it, options for "real change".

"There is an urgent need for changes to be made at the leadership level.

"I’d encourage the councillors, including the mayor, to take this opportunity to consider if they truly think they can continue working in the environment they currently have and make those changes for the betterment of the city, and if not, open the door for someone else to come in that is prepared to."

Southland Mayoral Forum chairman and Gore Mayor Tracey Hicks said it was not appropriate for him to comment on Sir Tim’s mayoralty.