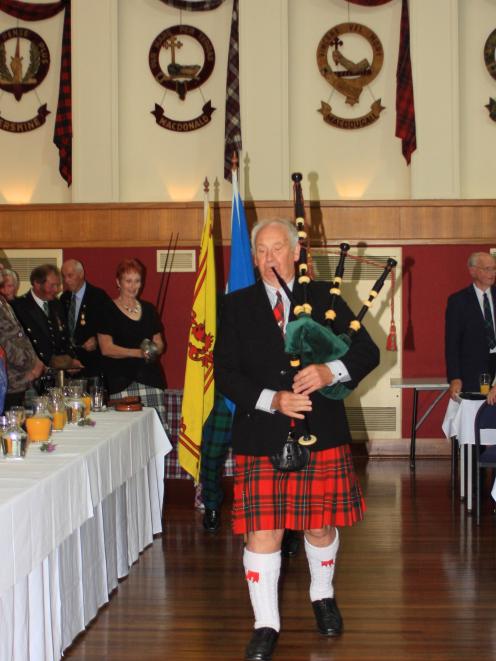 Piper Bill Blakie leads off the procession after piping in the haggis at the Robert Burns dinner held at the Scottish Hall in Invercargill on Saturday. Photo: Toni McDonald
Bagpipes, tartans, swinging kilts, haggis and, of course, a good single malt whisky were all part of the flair and fanfare of the Robert Burns Dinner at Invercargill’s Scottish Hall on Saturday evening.

The evening would not have been complete without the traditional Selkirk Grace, Address to the Haggis and Toast to the Haggis, Queen, Scotland, New Zealand, the Lassies and the man himself — Robert Burns.

However, it was his passionate plea to the audience to ask themselves what sort of planet they wanted to leave for future generations that generated some after-dinner discussions, Robert Burns convener Kathy Richardson said.

Father and daughter duo Steve and Kayla Wilcox entertained at the sellout dinner with Celtic ballads during the meal and more modern melodies later.

A celebration of Robert Burns would not be complete without singing the famous poet and song-writer’s best known composition, Auld Lang Syne, at the end of the evening.

Celebrating the Scottish bard’s birthday each year has become a centuries-old tradition since his death in 1796.

The 37-year-old Scottish cultural icon left behind a rich heritage of sonnets, lyrics and works which addressed many political and civil issues of his time.

Burns was buried with full civil and military honours on the same day his son Maxwell was born.

His published literary works helped to support his widow and children.