Wish to formalise ownership of run 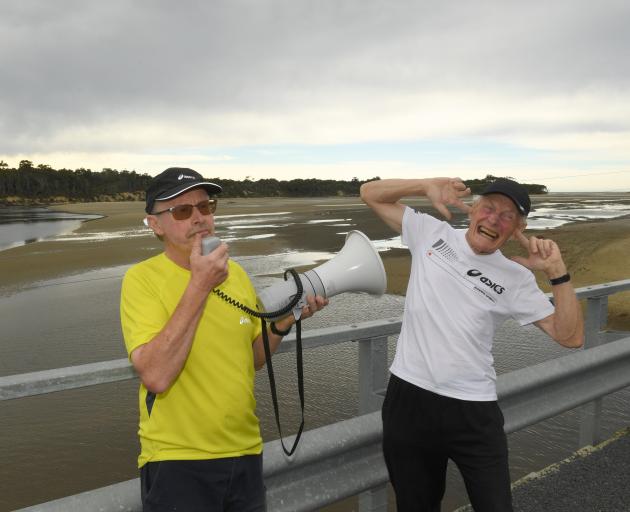 Papatowai Challenge founder Wayne Allen (left) and fellow event organiser Peter Hill prepare for the Catlins bush run last year. Community ownership of the the event may about to be consolidated. PHOTO: STEPHEN JAQUIERY
A Catlins bush run could soon be enshrined as a community-owned fundraiser.

The Papatowai Challenge was founded by local crib owner Wayne Allen in 1997, and has since grown to become one of the South's largest running and walking events.

Mr Allen (70) stepped back from organising the race last year, and handed over the reins to Sport Clutha for this year's event in February.

Typically, the event attracts between 300 and 400 entrants, all proceeds going to Catlins community organisations.

During a recent meeting of the Papatowai and Districts Community Association, the question was raised of enshrining the race as an annual community fundraiser, as no formal arrangement had been made with its new operators.

Mr Allen said the community was "very happy" with the way Sport Clutha had run the event this year, but wished to formalise community ownership of the challenge for its future benefit.

"Sport Clutha have done a tremendous job thanks to [co-ordinator] Craig [Gordon]. We were just aware the question of ownership hadn't been formally discussed. It's something we'd like to bring under the community association moving forward, in order to future-proof ourselves against unforeseen changes."

Mr Allen said he had started the event with fundraising in mind, and wanted to see that element continue in perpetuity.

"It's an important event for Papatowai and surrounds, and we'd hate to see that change in any way."

"At present we run the event but don't own it, and take a small piece of the pie to cover costs, etc. Personally, I don't see any change in that arrangement, and understand Wayne's desire to ensure the race is still there and doing its job in 50 years' time.

"It's a fantastic event. We like to take care of all our wee communities."