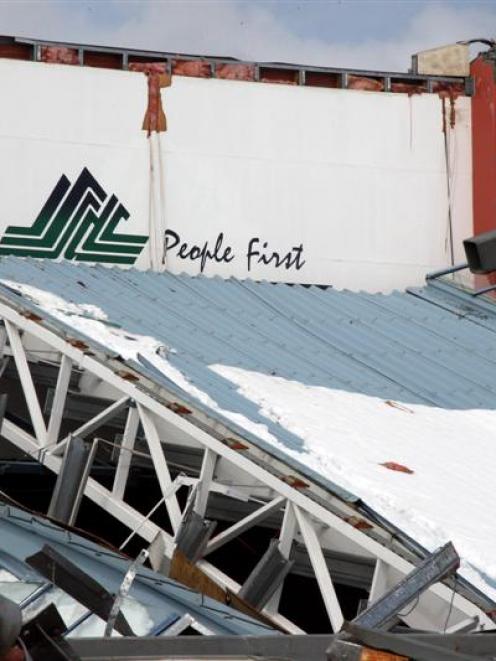 The collpased roof is shown in this September 20 file photo. Credit:NZPA / Dianne Manson
Inadequate workmanship, the low expectations of the old building code, and unusually heavy snow contributed to the collapse and ultimate destruction of Stadium Southland, the findings of an independent review committee say.

The Stadium Review Committee has told the Southland Indoor Leisure Centre Charitable Trust that its stadium roof was designed to exceed the snow loading requirements of the old building code, but that the snow that triggered the September 18 collapse exceeded its capacity.

Jeff Grant, Warren Clarke and Chris Ward acknowledge there were issues with the roof trusses during construction, but conclude the appropriate remedial work was carried out - even if there were concerns about the quality of some of the workmanship.

They recommend plans for the new stadium be peer reviewed before construction and that it is accompanied by a quality control programme, but steer clear of apportioning blame or establishing the legal responsibility.

Even so, the committee establishes there was a loud bang - probably a weld failure - in the moments before the roof collapsed.

There were then "failures" at the trusses beside the east and west walls of the community courts, the damage moving east-to-west in a domino effect.

Expert advice suggested the snow on the roof was probably heavier than the design loads, stressing the purlins and the roof structure to the point where the trusses, in succession, failed.

The stadium was built by Amalgamated Builders when the building code specified a snow load of 0.37 kilopascals (KPa).

It was designed to withstand 0.4KPa, but September's unusually wet, heavy snow was in the range of 0.36KPa and 0.45KPa.

The current building code stipulates a 0.63KPa load: the committee's report says the old snow loading requirement was too low.

That some trusses and supports and pre-cast columns were not originally designed to support full design loads was identified during construction in 1999, after reports the roof was sagging under its own weight.

The committee says the peer reviewer believed it identified the main elements that did not meet the building code.

The stadium trust asked for the problems to be fixed, and the Invercargill City Council issued a Code Compliance Certificate in November 2000.

The committee says appropriate remedial work was carried but that here were issues with the quality of workmanship.

The engineering supervision of that work was also inadequate.

Concrete columns supporting gantry trusses were small and badly detailed, and there was concern inserts between the steel trusses and the concrete columns did not have adequate concrete cover to make the joint effective.

A visual examination suggested remedial welding was not up to standard.

Sample welds were being tested, the committee says.

But, "whether the roof would have collapsed even if the workmanship on the remedial work was up to standard is a point that can never be answered", the committee concludes.

* Insurer NZI and the Department of Building and Housing are also investigating the collapse, and the National Institute of Water and Atmospheric Research is preparing a report on the snowfall.