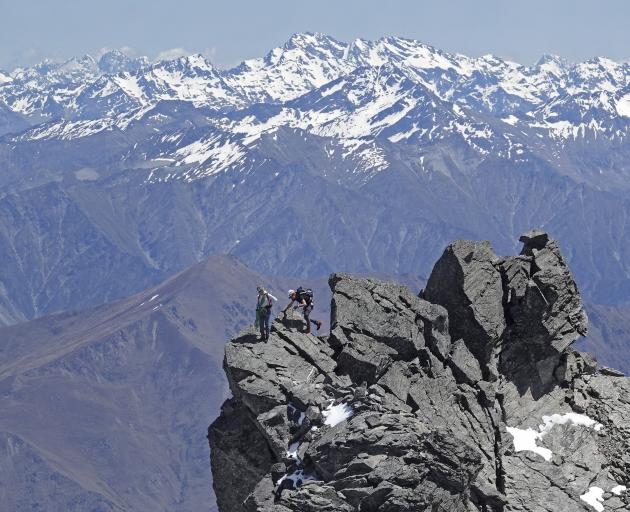 Wanaka mountain guide Steve Moffat (left) and client Frank Jasper, of Arrowtown, admire the view from the peak of Double Cone (2307m), on the Remarkables near Queenstown on Wednesday, in this photo taken from Single Cone (2319m).PHOTO: CHRIS PRUDDEN
The South Island's mountaineering tourism industry is in survival mode, getting by on small numbers of local clients, a Queenstown mountain guide says.

Chris Prudden said the Covid-19 pandemic and closure of the borders had taken away up to 90% of the industry's business.

It would remain dormant until Australians began returning, hopefully from next winter, he said.

Mr Prudden, who has been a professional guide and instructor for about 40 years, including 20 in the resort, said Australians made up 80% of his clients before the pandemic.

The rest were New Zealanders and a small number of North Americans and Europeans.

Some guiding companies had stopped operating, others were hibernating and the rest were getting by with very few clients, he said.

Some guides had moved into other types of work, while others had gone overseas.

''But most have sat tight in New Zealand, and thought 'I'm going to wait' and do whatever comes along.

''It's a huge lifestyle that's been affected.''

However, the industry would turn around eventually, he said.

His profession was probably coping with the effect of the pandemic better than most, he said.

''Working in the outdoors all the time, there's always something bigger than you out there telling you what you can do and what you can't do ... We're kind of used to having big things prevail over us.''