By Mark Price
0 Comments
Andrew Sloane's days of hitchhiking to work are over.

After thumbing well over 100 rides between his Lake Hawea home and his teaching job at Mt Aspiring College in Wanaka, Mr Sloane now has an electric bike to commute on instead.

The $7500 French-made Moustache bike was presented to him yesterday in a joint arrangement between the Queenstown importer Campbell Read, Wanaka's Good Rotations cycle shop and the Canlive Charitable Trust which helps families affected by cancer.

Mr Sloane has made a good recovery from a brain tumour over the last two years but is unable to drive a car. 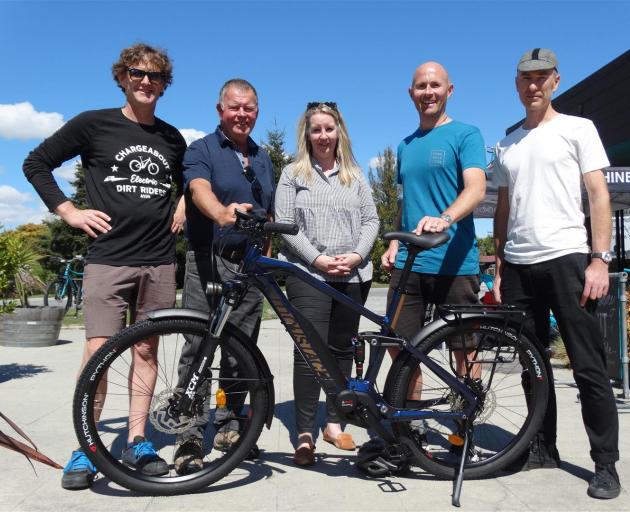 Moustache e-bike importer Campbell Read, of Queenstown, Stew Burt and Christina Perriam of the Canlive Charitable Trust, Mt Aspiring College teacher Andrew Sloane, and Matt Quirk of Good Rotations cycle shop, Wanaka, with the e-bike presented to Mr Sloane. Photo: Mark Price
With no public transport system in the Upper Clutha, he is left with few options other than hitchhiking.

''I've been relying on the kindness of people picking me up hitchhiking, neighbours, friends, colleagues, and I think I could almost write a book - Getting Hitched in New Zealand - between Wanaka, Hawea, Queenstown, Cromwell, you name it, I've tried it.''

On one occasion he scored a lift with a grit truck clearing snow off the Crown Range Rd.

However, he finds it difficult without a driver's licence ''being at certain places at certain times''.

''Having no ability to drive, it's a big hit.

''Not being able to take the children anywhere, that's something I've had to come to terms with.''

Biking is Mr Sloane's passion, but with limited energy the one-hour cycle commute from Lake Hawea to Wanaka has mostly been too difficult.

As Canlive Charitable Trust Stew Burt explained, cycling home to Lake Hawea at the end of a day without a little bit of electric assistance can be a challenge, especially when confronted with a stiff nor'west breeze.