Freeskier to take a break from slopes 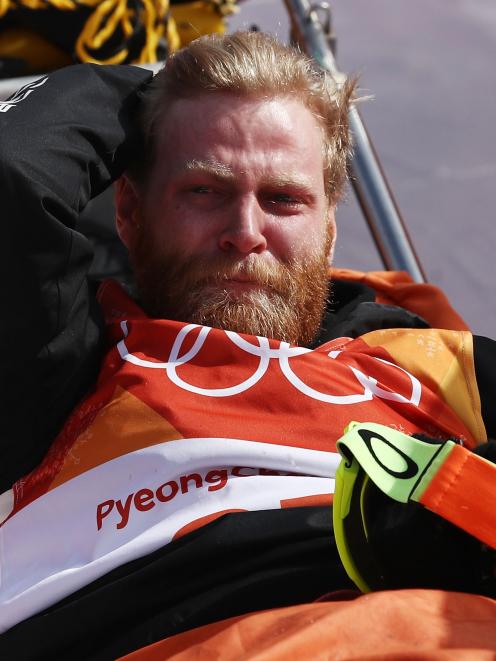 Byron Wells is stretchered off by medical staff after his crash at the Olympics. Photo: Getty Images
Freeskier Byron Wells says he will take a year-long sabbatical from skiing in order to fully recover from a run of serious injuries and increase his longevity in the sport.

Wells (26) has been recovering from his latest injury, a patella fracture suffered when he landed awkwardly after performing a routine trick in a training run mere minutes before the Olympic halfpipe final in February.

The fracture has required two surgeries to repair, and it will likely take Wells until at least October to fully recover, ruling him out of the New Zealand Winter Games in late August.

It was yet another setback for the Wanaka freeskier, who has suffered from two anterior cruciate ligament (ACL) tears, a broken foot, and shoulder surgery in the last six years.

Wells said the patella fracture occurred a year to the day since his last ACL tear, in the same knee, in the same halfpipe, performing the same trick.

"That wasn’t very nice to think about," he said.

Now, having just got off crutches, and with a long layoff ahead of him, Wells said it was a good time to take a break from the slopes in order to get in the best shape possible.

"My body has been beaten up so much over the last three, four years, and I’ve always come back quickly to get back into competitions. So I’ve always been coming back to skiing at about 70 to 80% of what I should be."

"Over the years there’s been a pattern of getting hurt when I’ve come back too early and wasn’t ready. It’s just not the way to do it really."

"I’ve decided to take a year off and have a summer to really just get my body back together and feeling good."

Together they make up New Zealand’s, and arguably the world’s, most renowned skiing family.

By taking a year off to recover, Wells said he was playing his part in achieving the brothers’ goal of all competing at one Olympics.

"It was always a goal for the four of us to go to one Olympics, which we’ve always been quite excited about. It was a devastating time this time [in PyeongChang] with Jossi having to pull out, so I guess that means I’ve got to go for another four years and make that actually happen."

Having had to withdraw from both the 2014 and 2018 Olympics with injury, Wells said he really wanted to "win the damn thing now".

He admitted being in constant rehabilitation had made him consider hanging up his boots, but he said freeskiing was "just too much fun to quit really".

He will spend his sabbatical finishing up his helicopter pilot’s licence which he has been working at for about two years, but never had the time to complete, he said.