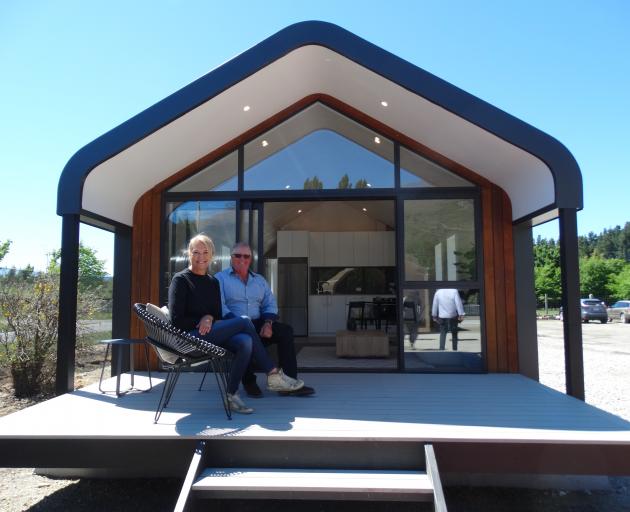 Claire and Peter Marshall on the deck of their Nautilus Modular house. Photo: Mark Price
A Wanaka man who helped make buying groceries easier wants to speed up the time it takes to build a house to put them in.

Eftpos NZ co-founder Peter Marshall yesterday launched a new modular building system he said would enable homes to be constructed within a week.

Mr Marshall unveiled his Nautilus Modular building system in Wanaka yesterday morning, and was in discussion during the afternoon with the Far North District Council's company Far North Holdings Ltd about setting up a 4000sq m factory to produce them in Kaikohe.

''That's what we are actually here for.

''We're not here just to build a little boutique factory to make a couple of modules out of Wanaka.''

The modules are produced on a spindle-like device constructed by Dunedin's Farra Engineering. Mr Marshall said these would be replicated in a factory that would employ about 70 people and turn out enough modules each year for about 250 houses.

The make-up of the modules is similar to structural insulated panels but in a single unit that includes the floor, walls and ceiling.

The 1.4m wide modules would be transported on lightweight trailers to a building site, placed on concrete slabs, locked together and clad with long-run roofing iron.

He considered the house on display at the launch, which included a lounge, bathroom, storage, one bedroom and two covered decks could be built for $2700 to $2800 per square metre, although the rate would drop as the size of the building grew.

Mr Marshall said he was not aiming for the cheapest end of the market but wanted to minimise waste and create houses that were ''user friendly'', warm and made mostly of New Zealand materials.

He had turned down suggestions of a module that would allow for a fire.

''You would just cook yourself.''

While the modular houses would suit anywhere in the country, he believed there was a particular need for them in Northland.

''Northland is a lot of buildings that are three walls and a tarpaulin.

''They couldn't do that down here because of the climate; the cold.

''It is a wet climate, it's an unhealthy climate so we have tried to build a very, very healthy, sustainable housing system, and Northland is an obvious market.''

Mr Marshall said he had ordered materials for 60 houses and had three strong inquiries before yesterday's launch.

As well as the modules being used for houses, they could also be used for worker accommodation, and two modules fitted together had been adapted for an ablutions facility.

Mr Marshall said the modules had been properly engineered and there had been consultation with local authorities to ensure they met, or exceeded the New Zealand building standard.