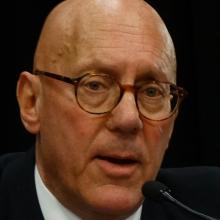 Jim Boult
The lease giving the Queenstown Airport Corporation control of Wanaka Airport will be made public today.

That assurance was given by Queenstown Lakes District Mayor Jim Boult at a meet-the-candidates function in Wanaka last night.

Mr Boult told an audience of about 100 he had given instruction for it to be released with no redactions.

The Wanaka Stakeholders Group has been seeking a copy of the lease and is ready to take the matter to the High Court.

The development of Wanaka Airport was one of the main topics at the function, attended by the three mayoral candidates and 10 candidates vying for a Wanaka ward council seat or a place on the Wanaka Community Board.

Mayoral candidate Nik Kiddle said it was important to reach a consensus on airport development, and that would require all information being brought out from "behind closed doors", and he suggested an airport "summit".

Mayoral candidate Al Angus suggested a corporation be formed to run Wanaka Airport, rather than have it controlled from Queenstown.

Both council candidate Lincoln Haworth and community board candidate Chris Hadfield drew spontaneous applause with their suggestions future airport development be in Invercargill rather than Wanaka.

Community board candidate Ed Taylor pointed out new technology was leading towards quieter aircraft, and he considered Wanaka Airport should be developed for domestic air traffic.

Infrastructure and housing were also discussed, and candidate for both the council and the community board Barry Bruce pointed out what he considered two reasons for high housing costs - council bureaucracy and the ownership of the land available for development.

"We need more competition in the market, other than the handful of people who control the bulk of the land."

There was also discussion around the ability of the community board to set its own agenda, rather than it being controlled by the council.