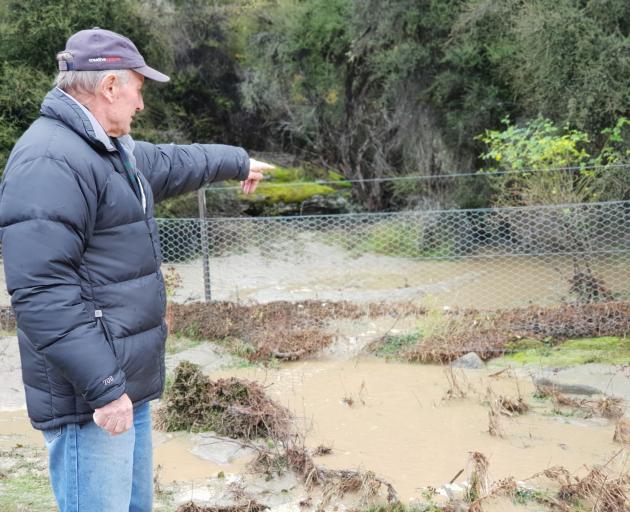 Concerned resident Don McKinlay yesterday points to the stormwater runoff from the Northlake and Hikuwai subdivisions flowing through the Hikuwai reserve and then into the Clutha River following days of heavy rain in Wanaka. Photos: Sean Nugent
The adequacy of stormwater systems in new Wanaka subdivisions has been brought into question by heavy rain this week.

The Queenstown Lakes District Council (QLDC) has begun an investigation into the significant surface flooding in parts of the town due to heavy rain.

According to QLDC statistics, about 50mm of rain fell in Wanaka between Sunday and Tuesday.

Wanaka resident Don McKinlay yesterday showed the Otago Daily Times the stormwater run-off from the Northlake and Hikuwai subdivisions flowing through the nearby Hikuwai Reserve and into the Clutha River.

He believed the developers were at fault and attributed some of the run-off to the removal of old pine trees along both sides of Outlet Rd, which bisects the two subdivisions.

"Those trees, which had probably been there 100 years, would have soaked up that water, but now there's no stopping it [the runoff]".

A 2013 report prepared by district council consultant planner Vicki Jones prior to the plan change allowing the Northlake subdivision to go ahead, noted the stormwater issue was raised by a number of those who submitted against the plan change.

"The relevant issues raised in submissions," she said, were "the adequacy of the stormwater management provisions within the Northlake Zone..."

She recommended "the plan change include a policy requiring stormwater infrastructure to be undertaken in accordance with the latest land development standard". 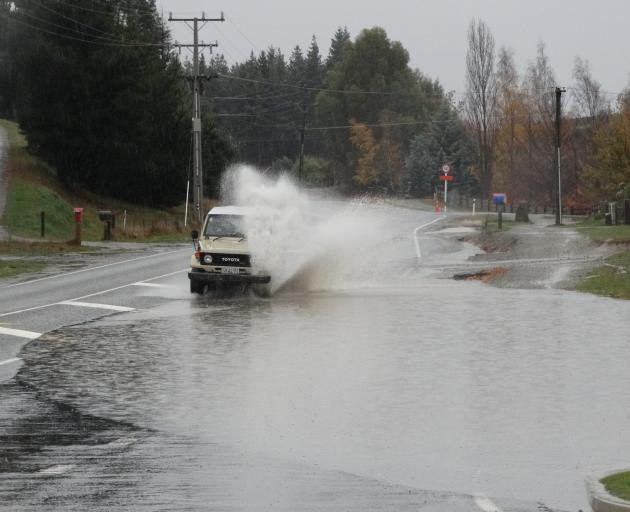 A motorist takes on severe surface flooding in Aubrey Rd, Wanaka, that submerged an entire lane of road on Tuesday.
A QLDC planning and development report on December 14 last year noted the Northlake special zone was granted a certificate of compliance for stormwater disposal by the Otago Regional Council on April 26, 2016.

The developers of the Northlake subdivision, Michaela Ward Meehan and her husband, Chris Meehan, could not be contacted for comment yesterday.

Similar stormwater issues had also been occurring at Bullock Creek, where sediment has spilled into the creek from the nearby Alpha Series subdivision seven times in the last 18 months, according to Fish and Game officer Paul van Klink.

Brown trout were currently spawning there, he said, and their eggs would be smothered by the silt and killed.

Developer Allan Dippie had not received any serious compliance action for any of the spills, Mr van Klink said.

Mayor Jim Boult said the flooding "leaves some questions that we need to be answered", while QLDC's chief engineer Ulrich Glasner believed the performance of some of the stormwater infrastructure, particularly in new developments, "did not meet our expectations".

QLDC said in a statement yesterday that developers had been contacted and were working with it to implement controls to prevent further erosion and sedimentation effects during periods of heavy rainfall.