A lone firefighter stands on Mt Alpha looking down at the smouldering land. Photos: Sean Nugent/Kerrie Waterworth
A bit of rain overnight has proven a blessing for firefighters battling to put out a 200ha deep-seated grass fire on the foothills of Mt Alpha, near Wanaka.

The work would continue all today and into tomorrow.

All of the public walking tracks near the site of the fire had been reopened to the public, but there was still work to be done to put the fire out.

"It can be misleading looking at the hillside from a distance, because it looks as though the fire is completely out.

"In reality there is a tremendous amount of heat in the ground, particularly in the burnt tree stumps and hollows."

Given the right conditions with wind, heat and low humidity, the fire could reignite if the hotspots were not dealt with thoroughly.

Meanwhile, a change in the weather had helped firefighters.

"We had 5mm of rain on the hill overnight, which has helped, but there are areas with heavier fuels that are holding a lot of heat," Mr Mawhinney said.

While no rain was predicted today, cooler conditions would help the crews.

Winds up to 30 kph and temperatures up to 22degC were forecast for Wanaka today.

A drone with thermal imaging equipment had been flying over the fire ground since first light this morning, while a ground crew dealt with hotspots and flare ups overnight.

An air exclusion zone over the fire ground had been extended until 9pm tonight, meaning that private aircraft and zones cannot come within 1 nautical mile of the site.

Dozens of firefighters and eight helicopters using monsoon buckets spent most of yesterday containing and dampening the smouldering vegetation.

Meanwhile, residents and campers at the edge of the massive fire field were last night  preparing for a second night on edge, as another day of high temperatures and wind threatened to reignite the flames.

Speaking from a fire command centre set up at nearby Rippon Vineyard, Fire and Emergency New Zealand (Fenz) principal rural fire officer Graeme Still said firefighters had been concerned by how close the fire, which reignited late on Wednesday night and spread rapidly.  had come to houses.

"We only needed a slight change in wind  and it could have given us some problems."

Firefighters would not be leaving  the fire until there had been substantial rain, he reassured residents yesterday. 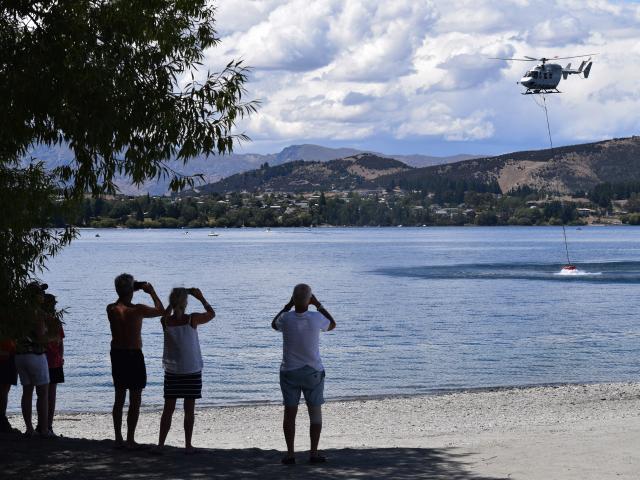 Holidaymakers at Waterfall Creek on the Wanaka lake shore watch a helicopter scoop up water in its monsoon bucket to fight the fire.
"They’re saying we might have a thunderclap later on. I’m not a religious man, but I’m praying."

"We’re doing our best to keep the fire inside the perimeter but this fire is definitely not out."

Mr Still  said the fire was deep-seated as there was no moisture in the ground, which had made for "very slow work on the hill" for firefighters.

Yesterday afternoon fire crews were on site from Glenorchy (2), Arrowtown and Dunstan (Clyde) and the Department of Conservation. More firefighters were expected last night, including a team from Mount Cook.

The fire had already cost hundreds of thousands of dollars in helicopter costs.

Fenz covered the cost of fighting such fires.

He thanked the Wanaka community for their generous support in supplying food and water to the command centre.

On Wednesday night the fire came within metres of the home of  Malcolm and Sally Law, who said it moved so quickly there was no time to evacuate.

"It was on us pretty much straight away," Mrs Law said.

"We were in the direct line of it when it first started [on Wednesday afternoon] so we were pretty worried we were going to lose the house," Mr Law said.

Then a slight wind shift pushed the fire uphill and coincided with the first fire crews arriving to extinguish the flames.

"Thankfully the house was saved, but we lost a lot of planting outside. We’re in a state of shock but we’re just grateful we’ve still got the house and there was no more damage."

The Laws said several fire crews came to battle the fire and were joined by neighbours who "appeared out of the smoke carrying hoses".

"We’re grateful for all the volunteers who came out of nowhere and started helping," Mrs Law said.

"It brings out the best in people, this kind of thing. It was pretty heart-warming to get the help that we got," Mr Law said.

The fire seemed to be under control later on Wednesday  evening and they were not worried, until they saw flames.

"We were out here having a cup of tea with the neighbours when we saw it had reignited and was heading this way," Mr Menzies said.

"Within about five minutes it was all ablaze."

As a volunteer firefighter himself, Mr Menzies realised there were no embers in the air, which would have indicated a more serious situation,  so they sat it out, until campers were advised they would not need to evacuate. 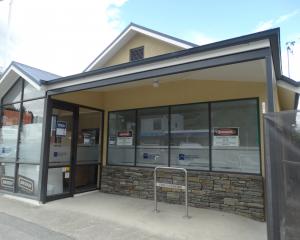