Vintage enthusiasts winners in US 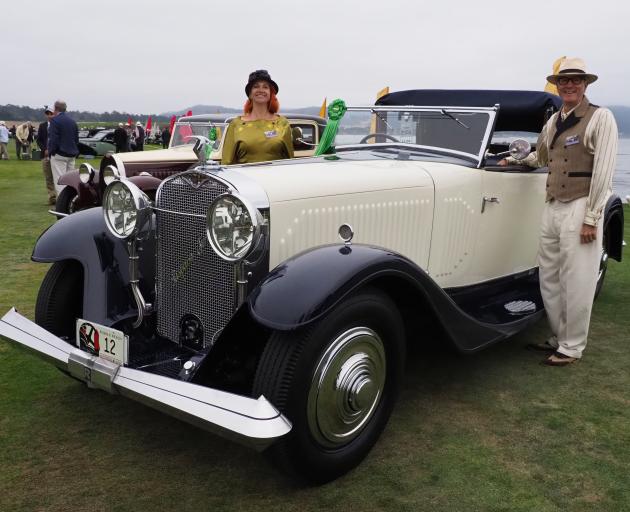 Sonia and Mark Richter beside their winning 1931 Hispano Suiza J12 Saoutchik-bodied Transferable at the Pebble Beach Concours d'Elegance in California. Photo: Lexi Maciel
A pair of Wanaka vintage car enthusiasts have unexpectedly won a major prize at one of the world's most prestigious vintage car events and could be the first New Zealanders to do so.

Mark and Sonia Richter won best in class for their 1931 Hispano Suiza J12 Saoutchik-bodied Transferable at the Pebble Beach Concours d'Elegance in California on Sunday.

Mrs Richter said they were invited to submit an application to the California Pebble Beach Motoring Classic.

Their Hispano was ''a significant car'' being the first J12 which was used as the 1931 Paris Show Car, she said.

They bought the vintage car in 2011, restored it and had used it primarily as a touring car.

''The win of a touring car, rather than a perfect restoration, was fairly unprecedented.''

''It seems the judges considered the fact that we drive it so much when comparing us to open cheque book restored cars that aren't used.''

She said they had been told it could be the first time a New Zealand-owned and New Zealand restored car had won a best in class at Pebble Beach Concours d'Elegance, but had asked the organisers to confirm that.

Over the past six years they had driven more than 30,000km in the vintage car, Mrs Richter said.

The couple, who had the car shipped to the United States, planned to leave it there for the next 12 months to take part in other vintage car rallies and ''to make the most of the experience''.

The Pebble Beach Concours d'Elegance is an automotive charitable event held each year on the Pebble Beach Golf Links and is widely considered the most important concours event in the world.

Concours are an exhibition or parade of vintage or classic motor vehicles in which prizes are awarded for those in the best or most original condition.

The 2016 Pebble Beach Concours d'Elegance raised more than $US1.75million ($NZ2.4million) and the Concours has given more than $US23 million to charities over the years.