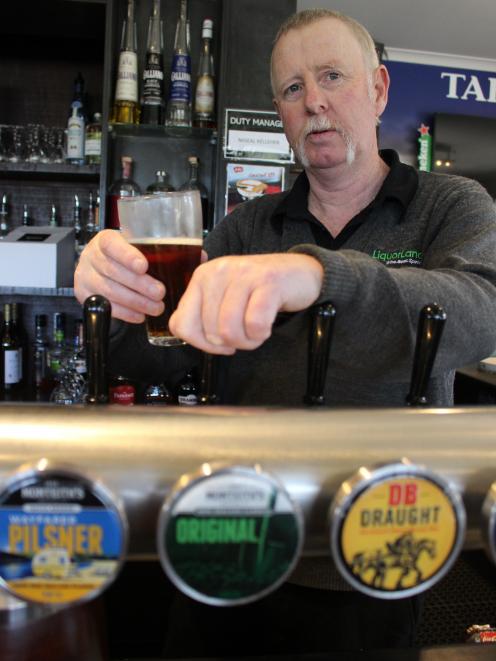 Hotel duty manager Nigeal Kelleher had a surprise last weekend when the beer he poured was not what was on the label. PHOTO: GREYMOUTH STAR
Punters throughout the West Coast have been unpleasantly surprised over the past week, when their mug of Monteith's Original Ale turned out to be anything but.

DB Heineken in Timaru apparently mistakenly put the wrong brew into an unspecified number of 30 litre kegs labelled 'Original', which were then sent out for distribution.

Greymouth's Recreation Hotel first discovered the error on a Saturday afternoon, when owner Brandon Parkinson changed a keg, and a customer complained.

Upon checking the stock it was discovered that all ten kegs were not as they seemed.

Recreation Hotel duty manager Nigeal Kelleher said it was lucky they discovered it before the Melbourne Cup, "but we were stuffed for the weekend".

"Of course you know the difference when you've been drinking it all your life!"

Moana's Hotel Lake Brunner had "about half a dozen" dud kegs and "there were plenty of locals up in arms," said owner Phillip Barnett.

"It was annoying for punters, we played Guess the Beer most of the evening! As soon as we got wind of it, we just closed the tap down and switched to bottles."

All three Blackball drinking establishments were caught out, starting with the Workingmen's Club which discovered the error on Melbourne Cup day, causing some confusion until it was found Formerly the Blackball Hilton was also affected.

When the Blackball Inn checked its batch number, it too had the offending stock.

The Runanga Club found out late on Friday night when a keg was changed, with president Tammie Sandrey describing it as "pale and fruity and horrible."

"We checked our other kegs and they were the same, so we bought stubbies in."

Woodstock Brewing Co, in the Royal Mail Hotel near Hokitika was also caught out.

"It's one of those weird and wonderful things," publican Colin Cutler said.

Neville Sheehan at the Nelson Creek Hotel was philosophical, saying "it doesn't really worry me, the regulars have switched to Speights and Tui."

The affected batch number was 199559morg.

Sophie Hoult, DB communications manager, said there was a bit of a mix up with some Great Divide Pale Ale and Monteith's Original kegs that were distributed to the South Island.

I am quite sure the Breweries and the Publicans/Customers affected will find an appropriate way for "disposal" of the affected ale...