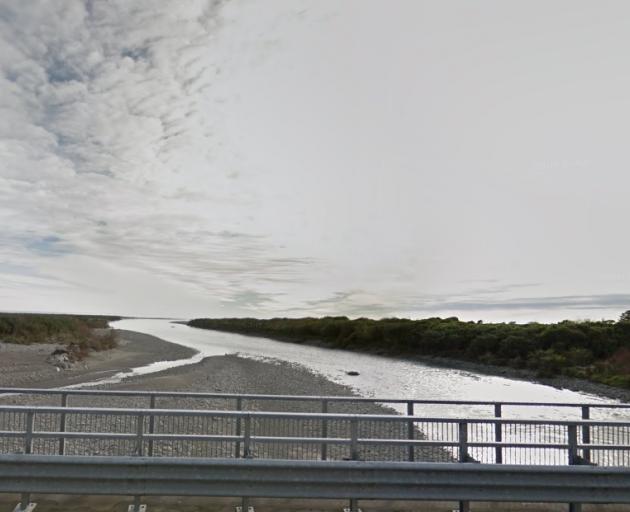 A view of the Arahura River, looking out to sea from the bridge on State Highway 6 north of Hokitika. Photo: Google Maps
"Where's my boy? I've got to be there for my boy."

Those were among the first words of a mother who survived being swept down the West Coast's Arahura River and out to sea following a car crash about 2am Saturday.

The five-hour ordeal began when she was driving her 6-year-old son to Grey Hospital for treatment for an injury.

Unable to get his mother out of the car, the boy walked nearly 2km to the main road, SH6, raising the alarm with a passing motorist and sparking an all-night search and rescue operation.

About 7.30am, the boy's mother, having fought her way through a surf rip, walked out of the surf and on to a farm fringing the wild beach. She was 7km from the river mouth and about 10km from where the car crashed.

Police are describing her survival as "miraculous".

"She is a lady who has a great will to live. It's an absolute miracle," Sergeant Mark Kirkwood, who oversaw the search and spoke to the woman afterwards, told the Herald.

"You go into a West Coast river, usually it's not going to end well.''

"She's a lot better swimmer than me."

The woman is recovering from hyperthermia in Grey Hospital, where she was headed to get treatment for her son when the car ran off the road, through a fence and into a paddock.

The search and rescue began when a motorist called the police to report that they had found a 6-year-old boy at 2am walking towards Greymouth along SH6.

"The boy told them that mum had crashed the car, that she was in water. He couldn't get her out, so he went for help," Kirkwood said.

"It was a reasonably cold night but not freezing and surprisingly, it wasn't raining."

The first priority was to find the car, as it was thought likely the boy's mother would still be in it.

The car had minor damage.

"The lady wasn't in the car and the car was about 300 metres from the Arahura River."

Police called on everyone able and willing to search through the night - search and rescue professionals and volunteers.

People came from the local speed boating and surf clubs, joining police, a police dog and folk from the Lake Brunner Coast guard.

"We put a LandSar [Search and Rescue NZ] member, who has his own pair of thermal binoculars, on board the rescue helicopter. The helicopter was using night-sun, a big fat spotlight."

"It's a dairy farming area and there are plenty of wee creeks, effluent ponds. We had no idea where she was to be blunt."

"We searched the area, we went along the beach, searched the river. We had people on quad bikes, on foot, in jet boats, about 40 people thereabouts. People heeded the call in the middle of the night, from Westport, from all over."

The woman's family had turned up and were talking to police. By now five hours had passed with no sign of her.

Then a farmer phoned police and said, "A woman has just climbed out of the surf and into my back paddock."

Kirkwood, who spoke to the woman, thinks she had become disoriented from the crash and tried to cross the Arahura River.

"She told us she had been swept down the river, swept out to sea. At one point she saw a helicopter."

At the river mouth she was caught in a rip and had to fight her way to the beach, diving under waves in the dark, eventually making it ashore. At about 7.30am she reached a farmhouse

The farming couple took her inside and kept her warm until emergency services turned up.

"Why she then went into the river, I have no idea," said Kirkwood.

"Our job in search and rescue is to find them. How they got there doesn't really matter, the thing is to return them to their loved ones."

"She isn't big or small. She's a medium size lady with a great will to live."

Her young son was unharmed and returned to the care of relatives.