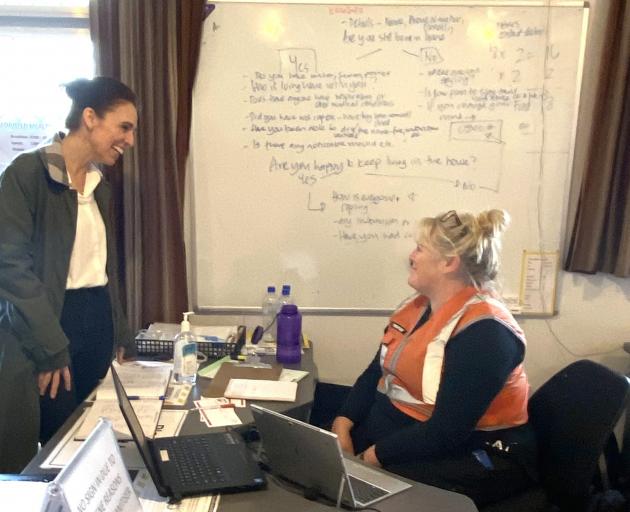 Jacinda Ardern flew directly from Wellington to Westport yesterday, and was driven through the flood-damaged streets by Buller Mayor Jamie Cleine. She then visited the emergency operations centre at Victoria Square, and met staff driving the recovery.

Ms Ardern also saw for herself some of the growing rubbish stockpile of ruined carpets and furnishings. The huge amount of waste generated has quickly become a major headache for the Buller District Council, as has the accommodation shortage to house those displaced from their homes.

During the Prime Minister’s visit, the Government announced it had activated ‘‘Enhanced Task Force Green’’ in response to the West Coast and Marlborough flooding.

Social Development and Employment Minister Carmel Sepuloni said up to $500,000 would be made available to enable the unemployed to help with the clean-up.

‘‘This funding will mean jobseekers can be employed to help farmers and growers clear debris and complete clean-up work on their properties. It will also enable the local councils or other authorised agencies to hire jobseekers to help with the clean-up,’’ Ms Sepuloni said.

‘‘Government is keen to ensure that local jobseekers will be used wherever possible due to pressure on accommodation, particularly on the West Coast.’’

The Government expected up to 30 jobseekers would be employed to help out on the ground for a maximum of 12 weeks, she said.

Buller people needing help on their properties will be able to apply through Civil Defence.

Mr Cleine, who last night fronted another public meeting at the NBS Theatre in Westport, said they were hearing mixed reports about insurers, with some frustration over getting a response.

Mr Cleine said the response from insurers seemed to vary from company to company.

The Insurance Council was already in Westport, and IAG was setting up a pop-up store in the main street, probably tomorrow.

He said the military deployment had been extended for a few more days, so 14 troops and equipment would stay on to ‘‘break the back’’ of the waste removal.

Civil Defence controller and council manager Sean Judd said some people were back living in yellow-stickered homes. Teams would shortly go door to door to check on welfare needs.

Health teams were expected in town tonight to deal with concerns about damp houses.

He reassured concerned residents that the recovery team would ‘‘be around for months to support you’’.

Council managers were working with the Department of Internal Affairs to form a support package for the recovery. — Greymouth Star

Quote: "Jacinda Ardern flew directly from Wellington to Westport yesterday, and was driven through the flood-damaged streets by Buller Mayor Jamie Cleine. She then visited the emergency operations centre at Victoria Square, and met staff driving the recovery."
She then flew back to Wellington and revisited the flood protection funding as shovel ready, signed it off, transferred the funds to make it happen, then the good folk of Westport had the financial resources they need to get the job done.
Come on Jacinda, your government declined this project.......time to crack open the cheque book. The coast has had too much taken from it by government policies, but the government has profited very well from from the coast...time to put something back, as you continue to import coal from Indonesia to generate power. You have seen what has happened, you have seen the impact on the community......what are you waiting for?