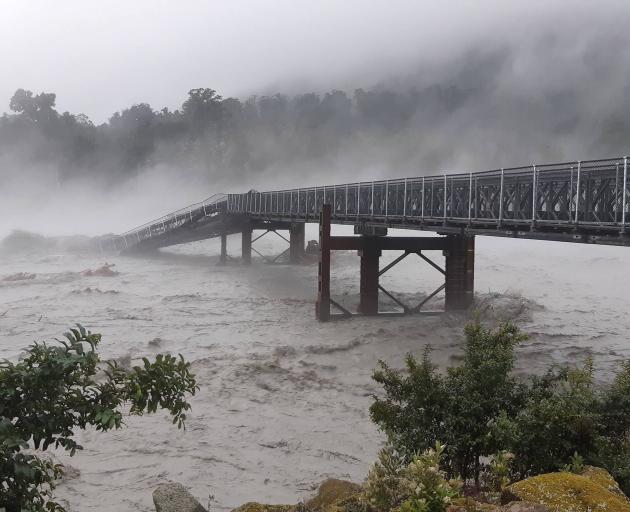 The Waiho Bridge washout cost the West Coast an estimated $50.4m in lost earnings. Photo: ODT files
After a bumper tourist season last summer, West Coast leaders are warning the signs are not so good for the approaching season.

The threat of a United States-China trade war, and Brexit, had given the market the jitters, Tourism West Coast regional tourism manager Jim Little said.

The latest tourist spending figures, released recently, showed a 3% decline on the West Coast for the year to the end of June. June alone was down 23%, or $19million, compared with June last year.

International visitor arrivals were "softening" across the board, although forward bookings were about the same as this time last year. However, "we are getting more cancellations 30 days out", Mr Little said.

Europe, the United States and Southeast Asia were still good, but the UK was down as a result of Brexit, and there were fewer Chinese arrivals through Auckland and on the West Coast. Christchurch bucked the trend with more Chinese arrivals.

"Fox [Glacier] road closure has an impact, so we are pushing Lake Matheson a lot more. Waiho Bridge wash-out cost the Coast an estimated $50.4million in lost earnings, which has dragged our annual expenditure down significantly," he said.

Westland Mayor Bruce Smith said the cumulative effect of those two events alone was having an effect - "It's a lot."

Internationally, Brexit was going in circles, and the potential US-China trade war was making people wary.

"I've been around long enough, I've seen it three times. When you've seen it happen two or three times, `hello, here you go'. About every 10 years this happens," Mr Smith said.

"Greymouth is well positioned, and Buller too. But Westland - 60% of the tourism economy is in Westland. A significant downturn - I'm concerned it's on its way," he said.

He noted Air New Zealand had forecast a profit downgrade, which showed there were not enough "bums on seats".

The Chinese had led the growth and it was looking like there was now a "correction" in the market.

BusinessDesk reported the drop in the number of overseas visitors from Asia in June was offset by an increase from the US and Australia.

About 213,536 short-term visitors arrived in New Zealand in June, up 0.6% on the previous year, Stats NZ said.

Malaysian visitor numbers fell 44% in June compared with a year ago, while 20.1% fewer Indonesians visited New Zealand. There were 33% fewer visitors from Hong Kong. However, there were 61.3% more visitors from Taiwan.