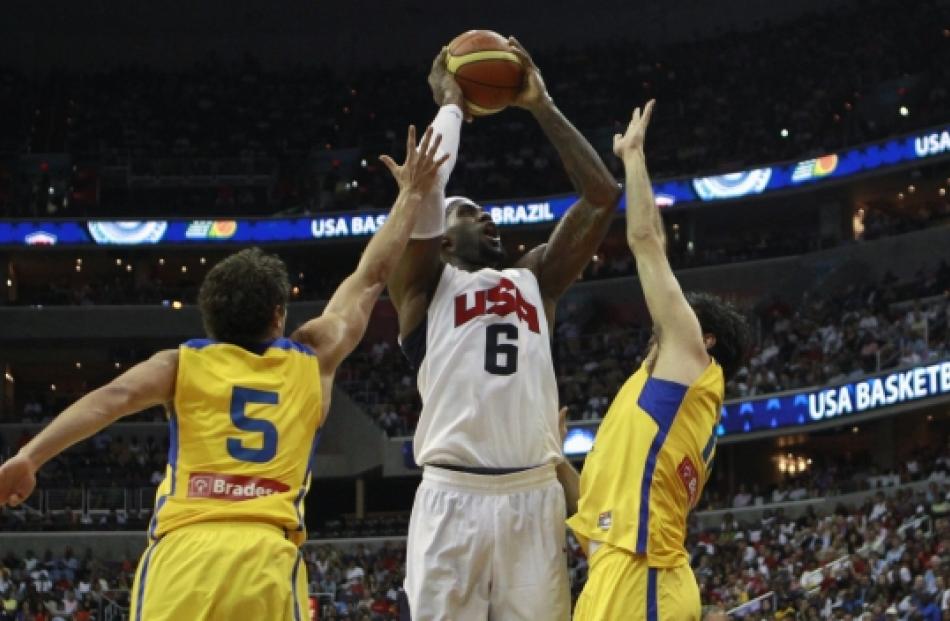 Lebron James of Team USA (centre) goes up against Raulzinho (left) and Guilherme Giovannoni of Brazil during their Olympic men's exhibition basketball game against Brazil in Washington. Photo by Reuters.

The U.S. men's basketball team eased past Brazil 80-69 in an exhibition game today, but their sluggish play and spotty shooting should banish any thoughts they will waltz to another Olympic gold medal in London.

LeBron James scored 30 to lead the Americans, who trailed by 10 after the first period and were out-rebounded (38-30) and out-hustled by their less-heralded counterparts.

"Our defence won the game," said U.S. coach Mike Krzyzewski. "It was outstanding for three quarters, especially because we didn't hit shots. And we missed dunks.

"I liked the mental toughness of our team. We kept reminding them: 'We're not doing it on offense. Don't let it affect defence.' And I thought it didn't."

U.S. President Barack Obama was in attendance but he would not have been impressed with the U.S. shooting as they hit only 29 of 71 from the floor, including six of 24 from three-point range.

While James hit 11 of 20 shots, his team mates were much less effective, Kobe Bryant managing only eight points and Carmelo Anthony just three for the Americans, who won Olympic gold four years ago in Beijing.

"We had open shots off the pick and roll, we just weren't making them," said U.S. forward Kevin Durant, who came off the bench to score 11 points. "We've just got to keep working.

"Their defense didn't do anything different. We just missed shots, layups, dunks. We've just got to fight through it. We've got to stick with it and we'll be fine."

Brazil took advantage of the Americans' poor shooting and sloppy ball movement to take a 27-17 lead after the first period.

Twelve points in the quarter by former NBA guard Alex Garcia, including two from beyond the arc, silenced the Verizon Centre crowd of nearly 20,000 anticipating a U.S. blowout.

The Americans, however, began running more efficiently and, anchored by James's seven points, outscored Brazil 20-5 in the second quarter to take a 37-32 lead into halftime.

An advantage in athleticism ultimately allowed the United States to pull away in the second half.

Garcia led Brazil with 14 points while Anderson Varejao of the Cleveland Cavaliers added 12.

Last week, the U.S. squad opened their exhibition campaign in Las Vegas with a 113-59 rout of an outmanned squad from the Dominican Republic.

The Americans will now leave for England to continue training ahead of the Olympics and will face Great Britain in an exhibition at Manchester Arena.

Obama met with the Americans at halftime and while Krzyzewski said it was just a social event, the coach was looking for a little presidential assistance.

"Afterwards, I had a chance to talk to him," said Krzyzewski. "I told him he should have told the guys they should start hitting some shots."