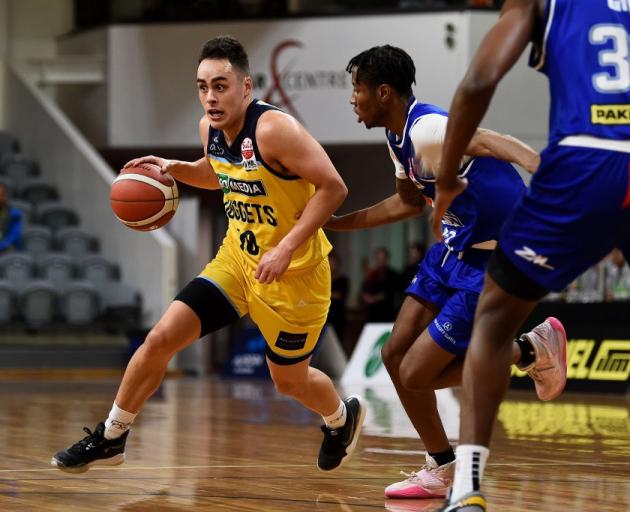 Those were the thoughts of Otago Nuggets general manager Angela Ruske after the side’s first home National Basketball League game in seven years.

The result on Saturday did not go the team’s way, as it was outplayed in a 95-73 loss to a classy Wellington Saints team.

But it was a show of top-level basketball Dunedin has been deprived of for a long time.

From an event point of view, Ruske had been pleased with the night.

"I think it went really well," she said.

"The support and the noise from the crowd was a true indication they enjoyed the game.

"And from our perspective, entertainment and exciting basketball was delivered."

While there had been a few minor "teething issues", she said the feedback had been largely positive from fans and the NBL.

A crowd of 1400 turned out for match, the majority in a mostly full South Stand at the Edgar Centre.

It was about 1000 short of the sell-out that had been hoped for.

But it was a solid turnout nonetheless, and one Ruske felt would grow as the season progressed.

"It looked great having the South Stand packed," she said.

"I think we were at about 1400 ticket sales. I don’t think Anzac weekend and a few people being away helped our cause.

"I think it will grow, I think a lot of people that haven’t been at games before really enjoyed it.

"So I think word of mouth will help grow numbers there."

She said the team was running a school holiday camp this week, while it would begin school visits next term.

That would help the team’s presence in the community and grow support, particularly among kids who may not be old enough to have that connection with the team.

For Ruske it had been special to see the team back on court after plenty of hard work went in to getting the team back.

"I had a few moments before everyone took the court where I stood above the West Stand there and looked down.

"It was just a moment of absolute happiness we could get the team back on the court and give them their opportunity, as well as something for the community to enjoy."

There would be no rest for the staff either, as the Nuggets are back home the next two Saturday nights.

The Nuggets host the Taranaki Mountainairs this week, before the Manawatu Jets come south in two weeks time.