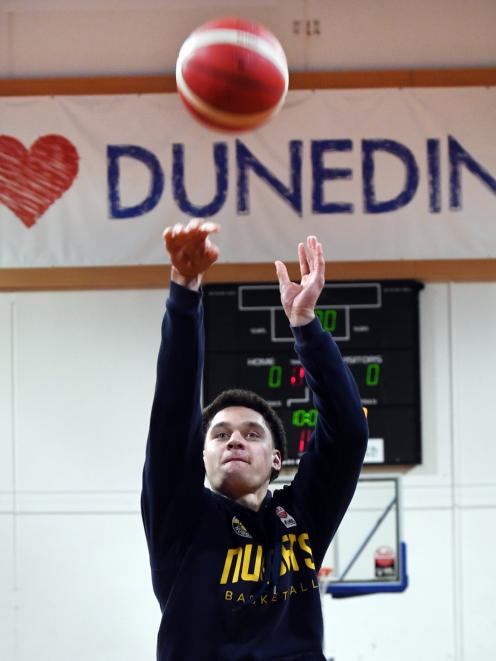 Pafe Momoisea shoots at Otago Nuggets training on Thursday at the Edgar Centre. PHOTO: STEPHEN JAQUIERY
Everything worked out in the end for Pafe Momoisea.

He had always wanted to play in the National Basketball League.

It just happened a little earlier than he expected.

The 21-year-old will conclude his first season with the Otago Nuggets tonight, as the team hosts the Canterbury Rams at the Edgar Centre.

It was the latest stop in a journey which has gradually taken him further south, with an American stint in the middle.

Momoisea has been one of the team’s most improved players this season.

After arriving in Dunedin as a relative unknown, he has worked his way to become a reliable presence off the bench.

‘‘I’ve felt that,’’ he said around improving as the season went on.

‘‘I feel like I started off pretty rusty and a lot of people were telling me I was real passive.

‘‘But I think once I got over the first half of the season, I got out of my shell a little bit and I’m just playing a lot better.

‘‘A lot of that starts with practice and doing better at practice. I workout with Isaiah Moss a lot, and getting advice from him and Geremy [McKay], who I also live with.’’

Momoisea grew up playing rugby in Manurewa, South Auckland, and did not take up basketball seriously until he got to high school.

He had always enjoyed playing with his mates and first made a representative team in the under-17 age group.

He continued to put in work, which eventually led him to NCAA division two school Coker College in South Carolina.

Issues in getting a visa delayed his arrival and he decided to red shirt — train and not play, while retaining that year’s eligibility.

The team did not go well and at the end of the season the coach who had recruited him was fired.

Momoisea was assured he would keep his scholarship, until he was told by the new coach that if he came back he would have to pay his own way.

He returned to New Zealand determined to keep his basketball dream alive.

With no club basketball in Auckland, he applied for a sports scholarship at Lincoln University after seeing a Facebook ad.

He got the scholarship and spent last year in Christchurch, beginning a food science degree which he has continued online this year.

Then some connections — notably 2020 Nugget Kane Keil — helped put him on the Nuggets radar.

‘‘If you told me I was going to be able to play at this level in high school I wouldn’t have believed you.

‘‘I would’ve done my four years of college and come back home and tried to play NZNBL anyway.

‘‘So I guess I’m just doing that a couple of years earlier, so I’m happy with how it all panned out.’’

Tonight’s game will have no impact on the top four, although a win would cement a fifth-place finish for the Nuggets with a winning 10-8 record.

It beat Otago 77-54 in the quarterfinals at the Edgar Centre yesterday.

In the boys section, Otago lost 87-69 to Manawatu in their middle eight quarterfinal.

The tournament finals are on this afternoon. 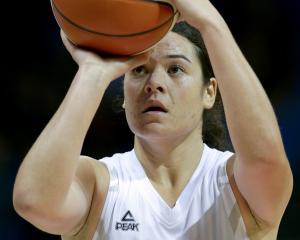