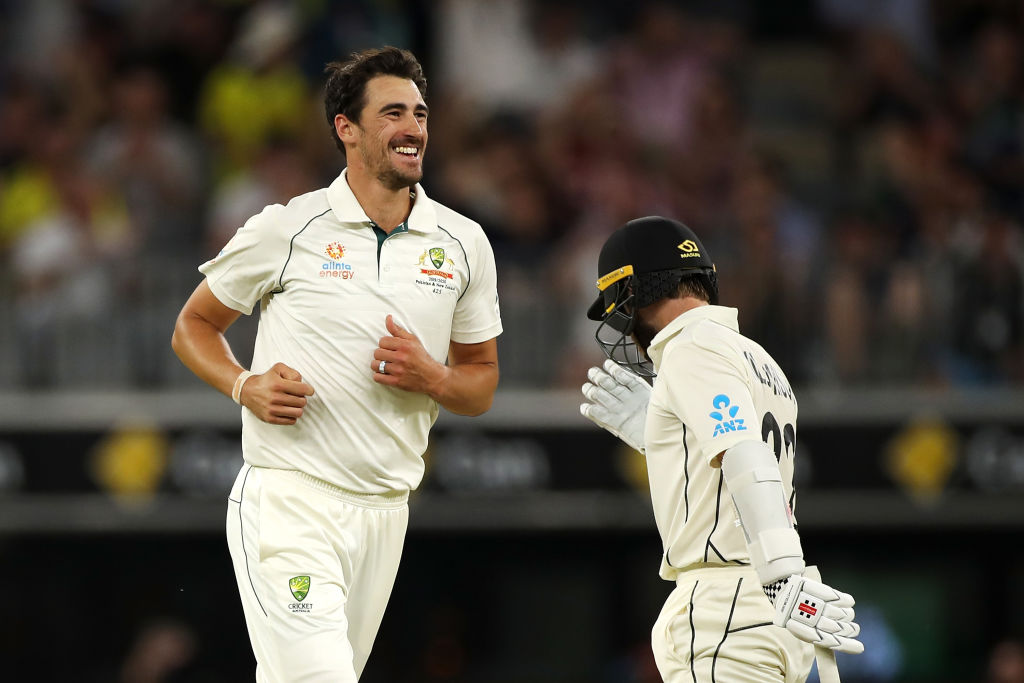 Mitchell Starc celebrates dismissing New Zealand captain Kane Williamson. Photo: Getty
A devastating spell of late-night bowling from Mitchell Starc has left the Black Caps teetering on the edge of disaster after two days of the first test in Perth.

Starc claimed four wickets in the final session to sink the Black Caps to 109-5 at stumps, still trailing Australia by 307 runs.

Tom Latham, Kane Williamson, Henry Nicholls and nightwatchman Neil Wagner were all sent packing by Starc, while Josh Hazlewood picked up the wicket of Jeet Raval, as Ross Taylor (66) and BJ Watling (0) were left standing at stumps, requiring an almighty rearguard on day three.

Starc and fellow seamer Pat Cummins had the Black Caps batsmen edging, wafting, and copping several body blows, and even the early departure of Hazlewood to a left hamstring strain – levelling the seam stakes after Lockie Ferguson was ruled unable to bowl for the rest of the test with a calf strain – failed to stop the danger.

A 76-run stand between Williamson and Taylor had offered promise, but even New Zealand's most reliable batsmen looked uncomfortable at the crease. Williamson's stay was ended by a stupendous Steve Smith catch – Smith flying one-handed to his right at second slip to remove the Kiwi captain – and when Starc claimed two more wickets before stumps, the rot had well and truly set in.

Perhaps most dispiritingly of all for the Black Caps, their efforts with the bat had wasted 146 overs of painstaking toil with the ball, with the under-manned New Zealand bowlers keeping their side in the fight, and earning plaudits for their fight and commitment.

To hold Australia to 416 was ultimately impressive from the New Zealand bowlers, after Ferguson's absence left the Black Caps with just four frontline bowlers. But, in temperatures reaching 40 degrees, they scrapped and fought, with Wagner (4-92) and Tim Southee (4-93) shining.

Wagner was as indefatigable as usual, somehow charging in for nine consecutive overs in blistering heat, and with blistering feet. His toil was rewarded with the key wicket of Marnus Labuschagne for 143, setting him up superbly with an array of short balls before bowling him around his legs with a fuller delivery.

Labuschagne looked excellent in adding 76 in reasonable time for the fifth wicket with Travis Head as the New Zealand seamers slightly lost the lines that had proved so restrictive on day one. However, both were dismissed soon after Australia reached 300, and they then started to bat strategically.

Both Tim Paine and Cummins batted purposefully slowly, in the hopes that they would be able to bowl at New Zealand under lights with the new ball in the final session. The period coincided with a surprisingly impressive 10-over spell from Raval, whose leg-spinners earned his a maiden test wicket with the scalp of Cummins, bowled around his legs.

Mitchell Santner started to find turn as well, but with night looming, Australia started hitting out, and Wagner and Southee wrapped up the tail in quick time.

Unfortunately for the Black Caps batsmen, that time was not a good one to be inserted. Latham departed second ball, trying to turn Starc into the legside but providing a leading edge back to the bowler, while Raval only lasted five balls longer before he was cleaned up by Hazlewood.

Coming together in the second over, Williamson and Taylor were faced with one of their biggest challenges, and they initially looked just as unconvincing as those who had come before them, narrowly avoiding a disastrous runout, and having to duck, bob and edge their way through a devastating early spell of fast bowling.

Taylor became more fluent, passing 50, and just as it looked like they had survived the worst of the Australian onslaught, Smith pulled off his screamer to remove Williamson. He was promptly mobbed by his teammates, all well aware just how crucial that moment was.