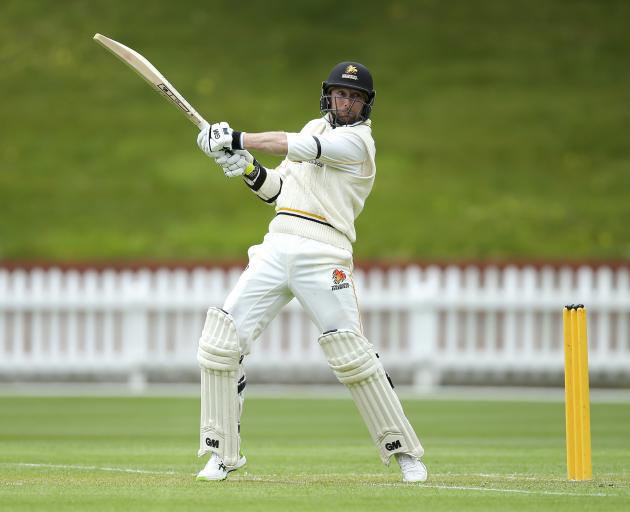 Devon Conway in typically belligerent form during a Plunket Shield match at the Basin Reserve for Wellington against Canterbury last month. The South African-born batsman is poised to make his international debut for New Zealand this evening. PHOTO: GETTY IMAGES
The three-year wait for Return of the Jedi was bad enough.

But waiting for Devon Conway to make his much-anticipated international debut was getting up there.

The prolific Wellington left-hander has been the hottest ticket in domestic cricket with a blade in his hands for the past two summers.

Since arriving in the capital three years ago, the South African-born 29-year-old has compiled a mountain of runs — a large mountain.

Tonight, he will get an opportunity to turn that irresistible promise into hard currency.

He is poised to make his international debut when the Black Caps host the West Indies at Eden Park in the first of three twenty20 fixtures.

"If that potential debut happens it will be very exciting," he told the gathered media yesterday.

The expectations on Conway have been rising faster than the housing market in the past year.

Perhaps not since Kane Williamson’s debut in 2010 has a player carried such a heavy burden of expectation.

Conway, though, seems to be coping with the pressure well.

"You don’t want to look too far ahead because that is when you get caught up in things you might not want to be thinking about," he responded.

When he made the decision to move to New Zealand it meant selling the car, the house and leaving everything which was familiar. That is the kind of pressure which creates hunger, and there is no doubting his hunger for runs.

In 21 first-class games for Wellington he has scored 2008 runs at an average of 69.24, including five centuries. He has been just as successful in white ball cricket.

In all he has plundered nine centuries and 23 half centuries across the three formats for Wellington.

His selection was so inevitable he was awarded a New Zealand Cricket contract a couple of months before he was eligible to play for the Black Caps.

Now we all hold our breath to see if the movie will live up to the book — can he turn that tremendous domestic form into runs at the highest level?

"He’s put numbers there to say pick me, and he’s kept doing it for a long period of time," Ronchi said.

"That’s really cool — to watch someone come in and knock the door down massively.

"If he’s picked [today] it will be a fantastic opportunity and I think there’ll be a lot of people, not just here, but his parents and family who will be over the moon and excited to see him on the international stage."