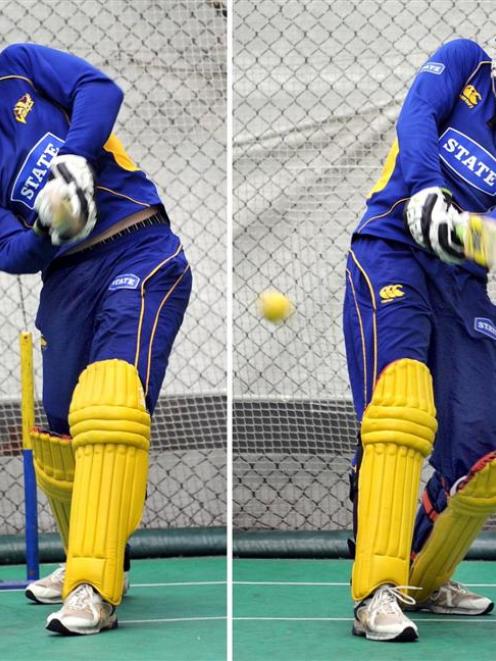 Switch-hitting Otago all-rounder Ian Butler shows his versatility during a training session at the Edgar Centre yesterday. Photos by Stephen Jaquiery.
Four years ago, Ian Butler's cricket career was in tatters, but the Otago all-rounder has battled back from a serious injury to earn an international recall.

The former New Zealand speedster was one of four players called into the Black Caps squad for the one-off twenty/20 match against Australia in Sydney on Sunday.

For the 27-year-old the recall was quite emotional.

He burst on to the international scene in 2002 as a rawboned fast bowler and looked to have a bright future.

Eighteen months later, in December 2004, his career appeared to be over when he could barely walk after playing for New Zealand against Australia in a one-dayer.

A scan revealed severe disc compression, two bulging discs and little chance of ever bowling the 140kmh-plus deliveries of which he was capable.

But Butler defied the odds and is back bowling, albeit at brisk rather than express pace.

"The feeling is even better this time," he said.

"The first time I got picked I'd only played two games for Northern Districts and was still ner-vous playing at that level. The thought of playing with guys I'd watched on TV was huge, and I knew I wasn't quite ready.

"When I got the call [on Wednesday], it was a completely different feeling. It was just pure excitement and I'm really stoked."

Butler sat out the 2005-06 season before trying to reinvent himself as a batsmen who could bowl a bit.

He struggled to get oppor-tunities and transferred from Northern Districts to Otago this season and has had an impressive summer in all forms of the game.

He has shown his versatility as a switch hitter, smashing three sixes this season as a left-handed batsman.

In the twenty/20 tournament, he has taken five wickets at an average of 13.80 runs, and he is a useful batsman with the ability to clear the boundary.

"I never had any doubts, but it [shifting to Otago] has turned out better than expected. I've loved every second of it down here. I put it all down to the no-fear attitude that we are trying to instil, from the senior players down."

All-rounder Nathan McCullum has also been added to the squad, taking the number of Otago cricketers to play for New Zealand this season to six.