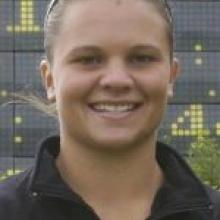 Suzie Bates
Dual international Suzie Bates is an athlete of rare quality but what makes her special is her temperament, Otago Sparks coach Clare Taylor says.

Bates smashed a remarkable 168 to help the White Ferns demolish Pakistan and book a place in the women's world cup final against England in Sydney tomorrow.

Last August ,the gifted 21-year-old was playing guard for the Tall Ferns at the Beijing Olympics.

The White Ferns have benefited from her return with the Otago all-rounder scoring 273 runs at an average of 54.60. She has also taken four wickets at 32.25.

Bates is from a talented sporting and academic family. Her younger sister, Olivia, is a promising netballer and brothers Tom and Henry have played premier rugby. Henry also played senior club cricket.

Her father, Robin, is one of the Crown counsel working on the David Bain murder retrial in Christchurch, and her mother, Jo, and Henry have both been admitted to the bar.

Taylor, who has played alongside Bates for four seasons and coached her for three of those summers, said what made Bates so successful was her ability not to get flustered, whatever the situation.

"She has always had the potential to do it [score a big 100] every game," Taylor said.

"She's got great hand-eye co-ordination and is quickly on to balls . . . but she is the kind of kid who does not get down easily.

"She seems to take everything in her stride, whether that's a first-ball duck or scoring a hundred. It's her mentality and competitiveness. She just wants to be the best she can.

Taylor, who played in five consecutive world cups for England and one football world cup, believes New Zealand has the better side but thinks England will win the world cup.

"Player for player, New Zealand has the stronger team . . . but it is about what happens on the day and I just feel England is playing more as a team."

Taylor added the White Ferns had of habit of blowing big games.

"It is a repeat of the '93 final, where we beat the Kiwis down at Lords.

"Again, on paper, I think they were the stronger team . . . One thing that might level [this] contest is the White Ferns have bottled big games."

England won by 31 runs when the sides met during the super six phase.