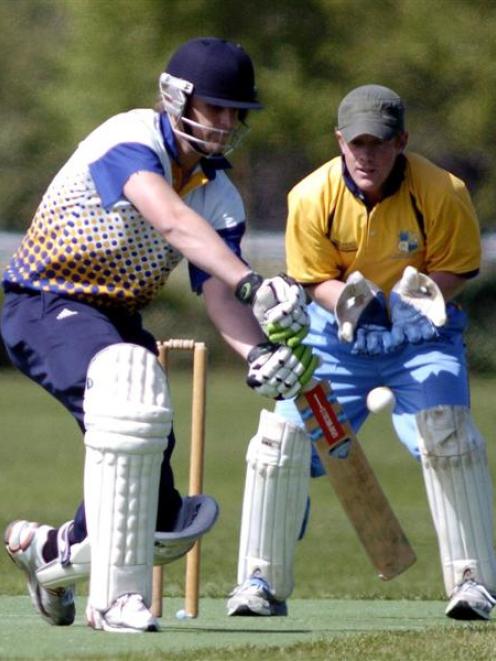 am Wells (Dunedin) chases a delivery as Otago Country wicketkeeper Scott Simpson looks on during a District Series match at the Oval in Dunedin yesterday. Photo by Gerard O'Brien.
Shaun Haig hit his second century in two days to help Pelichet Bay run down Southland in the District Series yesterday.

Haig, who thumped 148 for Albion in the senior competition on Saturday, scored an undefeated 120 to steer his side to a seven-wicket win.

Chasing 225 for victory, Haig smashed seven sixes and nine fours. He found good support from Simon Butler (44) and Marcel McKenzie (22 not out).

Earlier, Shaun Fitzgibbon helped guide his side through to 224 for seven with a fine innings of 77, and James Wadworth scored 60.

Left-arm seamer Craig Smith took three for 42 from 10 overs and Jeremy Medlin bowled tightly, taking one for 40 from 10.

In the other match, Dunedin Metro had a narrow win over Otago Country. Batting first, Dunedin posted 263 for nine thanks largely to a nice innings by Ant Harris (83) at the top of the order. Otago wicketkeeper-batsman Derek de Boorder chipped in with 36 and Jordan Sheed 27.

Fraser took three for 37 from seven overs for Otago Country and Dion McCall two for 24 from six overs.

Seemingly on target for victory, Country self-destructed with unlikely hero Sean Eathorne taking five wickets in a five-over spell. Eathorne was more lucky than threatening but ripped through the middle order to help bowl Country out for 249.

Dion Lobb and Jamie Murley worked harder for their two wickets apiece and conspired to remove the top four.