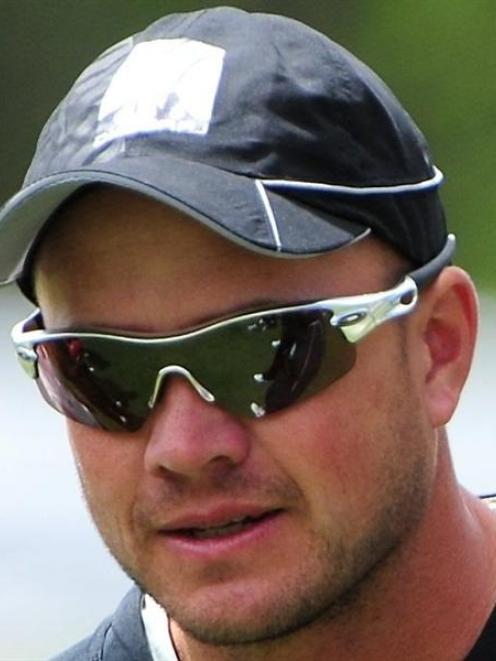 Peter Fulton
It was designed to answer the age-old, innocent question of 'who's winning?' - a question that has infuriated diehard cricket fans for decades.

But the innovative winning and score predictor (WASP) used during Sky Sport's TV coverage has proven more divisive than its creators had ever imagined.

The system, based on an extraordinarily complex statistical equation, gives a predicted score in the match's first innings.

In the second and final innings, it gives a probability of the batting team's chance of winning the match.

The system relies on data gathered from hundreds of previous one-day international (ODI) matches dating back to 2006.

System co-creator Dr Seamus Hogan explains: "WASP says, 'If the average team batting against the average bowling team on this pitch was to do its average performance from this point on, what would the outcome be?"'

Sky Sport has been using WASP for the past three summers.

"It's a very simple way of getting a feel for the game at home and predicting where the match is heading," he said.

It was picked up by UK broadcsater BSkyB last year and used in its English cricket coverage. But it has not yet caught on elsewhere in the world, unlike other innovations - stump-cam, run-out cameras, Snicko-Meter, infrared Hot Spot, or even the equally-complicated Duckworth-Lewis mathematical formula designed to calculate the target score for the team batting second in a rain-affected match.

ESPN Star Sports and Star Cricket, which paid US$2 billion ($2.7 billion) to secure the broadcasting rights of the 2015 Cricket World Cup hosted by New Zealand and Australia over February and March, are understood not to be using WASP for its tournament coverage for its potential market of 2.5 billion viewers.

Former Black Caps opener, and Canterbury captain, Peter Fulton, said players pay no attention to WASP, saying it's "a bit of a gimmick".

"When I watch a game, I don't take much notice," said the veteran of 49 ODIs. "It might help someone who doesn't know much about cricket but if you know the game then you always have a fair idea of how evenly the game is poised."

Yesterday, when the Black Caps were 238/5 after 40 overs, WASP forecast New Zealand would score 304 from its 50 overs.

During Tuesday's ODI between New Zealand and Sri Lanka in Nelson, WASP -- which does not take into account which player is batting at the time -- came under criticism for apparently writing off the home side's chances of winning.

In the second innings, the Black Caps' chance of successfully chasing down Sri Lanka's score of 276 plummeted to 14 per cent at one stage -- yet New Zealand won comfortably in the end.

Radio Sport reporter Guy Heveldt vented on Twitter: "If there's one game to prove WASP is a waste of time and energy, that was it. Below 30% nearly the whole time #NZvSL."

"If WASP says 51 per cent, the team is just slightly ahead. If it says 96 per cent, they are well ahead. At 14 per cent, as it was on Tuesday, it says New Zealand has a one in seven chance of winning the game," he said.

Dr Hogan, who created the system with University of Canterbury PhD graduate Scott Brooker, said part of the criticism emerges because it is "badly named".

"It's not a predictor, it's a statement of how well a team is doing, not what you expect to happen."

He cited the example of a rugby test where Ireland was leading the All Blacks 10-9 at halftime.

"If you asked who's winning, it's 10-9 to Ireland. But if you asked who do you expect to win, you'd go with the All Blacks because of who they are. WASP measures who is winning at the time."

Dr Hogan said he was "disappointed" that WASP won't be used during the world cup.

In the future, he expects Indian broadcasters to employ the system for its coverage.

"Some people may not want to have a measure of who's winning, they may consider that they are being insulted and that they can work it out for themselves," Dr Hogan said.

"But most cricket fans, especially Indian fans, love the data aspect. We know that averages and strike rates are bad measures in limited overs cricket and WASP just provides a different way of looking at it."

Dr Seamus Hogan - one of the creators of WASP - described the system:

Let V(b,w) be the expected additional runs for the rest of the innings when b (legitimate) balls have been bowled and w wickets have been lost, and let r(b,w) and p(b,w) be, respectively, the estimated expected runs and the probability of a wicket on the next ball in that situation.

We can then write:

Since V(b*,w)=0 where b* equals the maximum number of legitimate deliveries allowed in the innings (300 in a 50 over game), we can solve the model backwards.

This means that the estimates for V(b,w) in rare situations depends only slightly on the estimated runs and probability of a wicket on that ball, and mostly on the values of V(b + 1,w) and V(b + 1,w + 1), which will be mostly determined by thick data points.

The second innings model is a bit more complicated, but uses essentially the same logic.