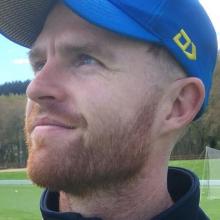 Nick Kelly
Nick Kelly turned on his former teammates and delighted his new ones with a century for Otago yesterday.

The 26-year-old was making his first appearance in the Volts one-day side and made it a day to remember.

He flogged 120 for 139 balls to help the Volts amass 282 and beat Northern Districts at Seddon Park.

Rain arrived late but the home side was struggling at 226 for eight - 28 runs behind the Duckworth-Lewis-Stern par score.

Kelly had some terrific support from Josh Finnie. The 22-year-old clobbered 58 from 63.

The pair came together when the Volts were teetering at 74 for four and put on a 119-run stand.

Michael Rippon blasted two sixes and a four in a useful contribution of 29.

Brett Randell (four for 59) and Anurag Verma (three for 57) did their best to peg back Otago.

With a competitive total on the board, Nathan Smith set about making the chase as difficult as he could.

He nicked out Bharat Popli for five and two balls later got one to rise and take the shoulder of Dean Brownlie's bat.

Then he dug in a short delivery to Katene Clarke, who had charged Smith and got a top edge.

Rippon got into the action, removing Joe Carter, the dangerous Brett Hampton and later on Peter Bocock as well.

But Henry Cooper was not giving it away. He took the long handle to Matt Bacon, whipping a brace of short deliveries for six and punishing a couple of others back down the ground.

Cooper was threatening to hit his side back into the match but got awfully unlucky.

He smacked a drive back at Jacob Duffy, who thrust up a hand in self-defence as much as anything else. The bowler ended up palming the ball as far as Bacon, who made a simple catch at mid-off.

The dejected batsman slunk off for 75 with his side 171 for seven.

The game dribbled on for a little longer until rain forced the players from the field in the 45th over.

Canterbury got out of a hole at Fitzherbert Park thanks to poor weather.

Central Districts had smashed 349 for four. George Worker (135) and Ben Smith (100) posted centuries and Tom Bruce added 56 from 28 balls. Canterbury was three for none in the third over when the weather closed in and the game was called off.

Auckland's Ben Lister produced a career best five for 18 to help his side defeat Wellington by four wickets at Eden Park Outer Oval.