ND’s total of 323 proves out of Otago’s reach 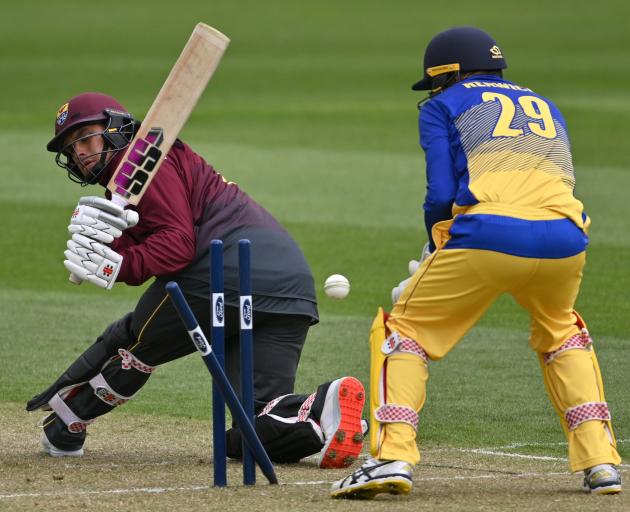 Otago wicketkeeper Mitch Renwick watches as Northern Districts opener Katene Clarke is bowled by Anaru Kitchen for 68 during their Ford Trophy match at the University Oval in Dunedin yesterday. PHOTO: GERARD O’BRIEN
Sometimes it pays to take your eyes off the ball.

Otago opener Nick Kelly was batting quite nicely before he got himself run out at the non-striker’s end for 47.

It was just one of several key moments which contributed to Otago's 40-run loss to Northern Districts in blustery conditions at the University of Otago Oval yesterday.

But credit must go to Henry Cooper. He top-scored with 88 to help the visiting side post 323 for eight.

It was probably 20 or so runs above par. It was a very defendable tally but the Knights lost a bowler in just the second over.

Jake Gibson took a nasty tumble in his delivery stride and had to be helped off the field.

Cooper ended up being called on to bowl the extra overs and the off-spinner did a stellar job, particularly at the end of the game when Otago was looking to attack.

His two for 60 does not sound like much of a spell but it proved to be a match-winner. Otago was bowled out for 283.

Volts coach Rob Walter thought his side's bowling and fielding effort was "average", which is code for poor these days.

"There were some opportunities in the field which would have definitely changed the game and that run-out obviously set us back.

"Nick had been going brilliantly at that point."

Otago was already in a hole when Kelly was run out.

Mitch Renwick spooned an easy caught and bowled, Neil Broom had his leg stump skittled by Anurag Verma and Anaru Kitchen dragged on a delivery from Joe Walker.

Your chances of winning plummet when you lose three wickets inside the opening 15 overs.

The Volts' prospects thinned even further when Kelly was caught ball watching and run out.

The boat took on more water when Josh Finnie crushed a drive but was brilliantly caught by Hampton at short mid-off.

But Nathan Smith (81) and Michael Rippon (57) batted their side back into the match with a partnership of 132 from 113 deliveries. The problem was they had been left just too much to do.

"One of them needed to kick on. They still had some part-time bowlers to finish up, so if one of them could have gone through I think we would have got the score."

Otago was missing form opener Hamish Rutherford. He missed the last two games through concussion but picked up a back injury on Friday and was ruled out. He is a chance of playing in the return game against Northern Districts at the University Oval tomorrow.

Northern Districts lost the wicket of Jeet Raval early but Katene Clarke (58) and the experienced Dean Brownlie (33) put on 79 for the second wicket.

Anton Devcich, in his 100th list A game, took advantage of the platform and went on the attack.

The 35-year-old left-hander helped slap 18 off the 25th over. He clouted Rippon for a couple of fours and a six. He nudged a single to bring up his 21st 50 in the format but was run out shortly after for 51.

His departure brought the hard-hitting Brett Hampton to the wicket.

The 29-year-old right-hander likes to free his arms and connected with a powerful lofted drive down the ground which was eventually intercepted by a tree.

He combined with Cooper in a damaging 71-ball 94-run partnership before holing out for 47.

The 48th over proved costly. Jacob Duffy had a full toss whipped away for six by Cooper and bowled a waist high no-ball the very next delivery which also sailed over the rope.

Northern Districts passed 300 in the over. But a flurry of late wickets limited the damage from the final two overs.

In the other games, Canterbury beat Central Districts by seven wickets at Pukekura Park and Wellington edged Auckland by four wickets at Eden Park Outer Oval.