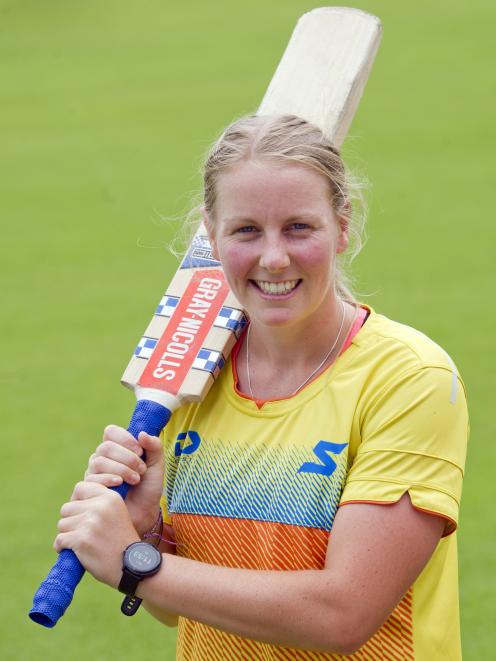 Her father Geoff played nine first-class games and two one-dayers for Otago in the 1980s.

And her grandfather Allan played three Hawke Cup games for Central Otago in the 1960s.

But what also helped sealed her cricketing future was her father’s decision to construct some training facilities.

"One year for Christmas Dad built us nets in the back paddock," she said.

"So that was where we practised most of the time."

Blakely, who hails from Ranfurly, made her debut for the Sparks while she was still at St Hilda’s Collegiate.

She played in a couple of one-dayers in late 2012 but the following summer was effectively her rookie season.

The newly minted 25-year-old — she raised the milestone yesterday — has been a constant presence in the side ever since.

She has played 70 list-A games for her province and today’s game will be her 33rd T20 for Otago.

Blakely was just 16 when her career started and she has taken some time to get comfortable at the top level.

Last season was her most productive and this summer is shaping up even better.

She started off with a career-high knock of 78 in the opening game of the Hallyburton Johnstone Shield and played a crucial role in steering the Sparks to victory in a T20 against the Northern Spirit at Bay Oval on Saturday.

Blakely scored 32 not out to guide her side to its maiden victory this season.

It was sweet feeling hitting the winning runs and she is keen to contribute to another win soon.

The Sparks host the Central Hinds in Dunedin this morning.

She chuckled when asked to explain what the role involved. But basically she gathers survey data which helps inform policy decisions.

The right-hander has a degree in health, wellness and physical activity from the Otago Polytechnic. She did a post-graduate degree in performance analysis and a master’s in applied science.

There is probably no-one better placed in the side to provide some performance feedback.

Funny enough, though, her improved form remains a little bit of mystery to her.

"Just his technical and tactical knowledge and just the confidence that he has in us gives me confidence as well."

That confidence has bubbled over into a more expansive game. She is not a power-hitter but she has been working on ways to access more of the ground and develop more shot options.

She has embraced the lap shot with limited success. She got out to it late last year and was dropped off the shot during the match against the Spirit.

But that willingness to take a chance and challenge herself has been rewarded.

"I’m not a huge over-the-top player so if I can find those gaps behind the wicket then that helps."

Blakely bats in the middle, so she is going to find herself playing a closing role more often than not.

It is a new role to her. She has previously batted higher up the order and had more time to get herself set at the crease.

Cumming’s influence has helped in that area. He has encouraged her to get out of her comfort zone.

"It is about practising it and then backing yourself to actually use it in the game."