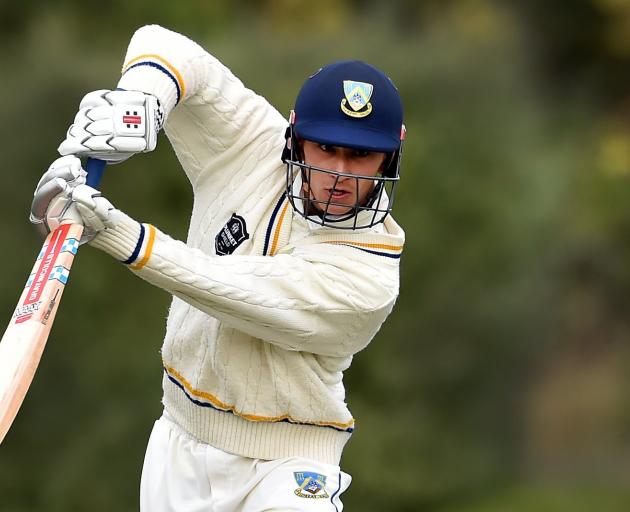 Otago batsman Max Chu watches the ball off his bat during the first innings of his side’s Plunket Shield match against Northern Districts at the University of Otago Oval on Saturday. PHOTO: PETER MCINTOSH
Otago's seamers have bowled the side into a strong position.

The Volts finished day two of their Plunket Shield match with a 132-run lead over Northern Districts at the University of Otago Oval yesterday.

Michael Rae took four wickets to help bowl the visitors out for 222, after Otago was bowled out in its first innings for 272 on Saturday.

It will resume at 82 for two in its second innings this morning, with Anaru Kitchen and Nick Kelly unbeaten on 33 and 40 respectively.

After being put in to bat, Otago lost an early wicket when Brett Hampton caught Anaru Kitchen off James Baker’s bowling for three.

From there each Otago batsman, as they have done for much of the season, managed to get starts. But none pushed on to a big score.

Opener Hamish Rutherford brought up 54, but he was the only one to reach a half-century.

Indeed Otago’s next six batsmen all scored between 20 and 35.

Walker took a useful three wickets for 48 runs, while Baker returned to clean up the tail and finish with three for 35.

Wagner and Ish Sodhi chipped in with two wickets each.

But Otago was able to do similar damage with the ball.

Alongside Rae’s four wickets, Jacob Duffy and Travis Muller took two each to leave Northern struggling at 149 for eight.

However, the Northern tail — notably a 32 from Wagner — helped edge it closer.

A mini-collapse through the middle proved key, giving the Volts ascendancy.

The side was at 90 for three when Bharat Popli was caught off the bowling of Muller.

However, Duffy then claimed the big scalp of BJ Watling, who failed to score after the Black Caps test wicketkeeper-batsman got bogged down after 15 scoreless balls.

Brett Hampton followed not long after when he was bowled by Rae for a duck.

That left Northern at 101 for five, which became 125 for six when Peter Bocock edged one to Otago keeper Max Chu as Muller claimed his second wicket.

Two more followed including Northern’s top-scorer, Joe Carter, for 40 before the tail pulled the visiting side closer, but it finished the innings facing a 50-run deficit.

However, Northern responded in the best way it could.

Baker claimed both Rutherford and Mitch Renwick in the fourth over for seven and 0 respectively to reduce Otago to 15 for two.

Both edged through to keeper Bocock, Renwick perhaps unlucky as he dabbled at a ball down the leg side.

However, Anaru Kitchen and Nick Kelly dug in and showed grit in an unbeaten partnership of 67.

Play will begin at 10am.