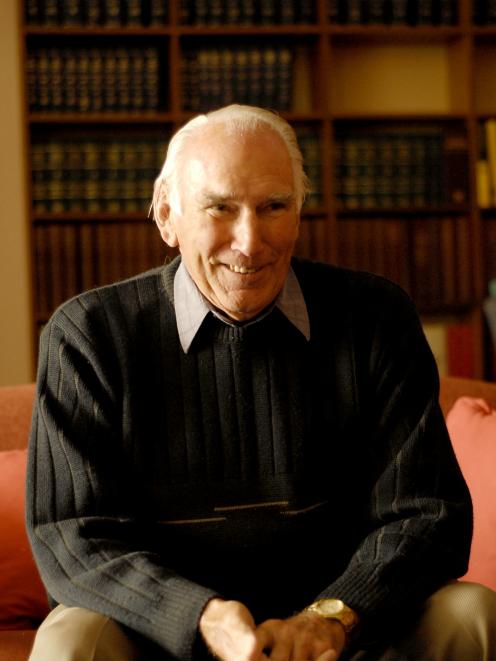 John R. Reid. Photo: Gregor Richardson
They often came at the game from opposite angles.

And their views on professionalism differed.

Turner did not play cricket with or against Reid but their career’s overlapped while Reid was a national selector in 1975-78.

Turner placed Reid alongside Bert Sutcliffe as one of the players instrumental in helping the test side gain traction.

"They were the two players in the New Zealand side at the time who New Zealanders felt that they were as good as any around the world," Turner told the Otago Daily Times.

"At that time a lot of New Zealanders tended to follow Australia as a national team almost as much if not more than New Zealand."

"They stood out as the two who gave us more credibility.

"Bert was known for his elegance and his consistency as a batsman.

"[Reid] was an aggressive player. He was aggressive in everything he did.

"And of course he bowled those medium-pacers and those off-cutters and so on.

"He was always in the game being an all-rounder and, of course, captaining as well. He had his hands pretty full and I think he enjoyed that."

At one stage Reid held the New Zealand records simultaneously for having the most runs, most wickets, most catches and most appearances.

Reid retired in 1965 and Turner made his test debut four years later.

They were quite different players. Turner was the defensively-minded opener and Reid the swashbuckling all-rounder.

"He would have been ideally-suited [to limited-overs cricket] because of his aggressive nature at the crease when he was batting".

"He was a strongly built guy and that came through when he was striking the ball."

Reid was a national selector at the time when Turner fell out with the New Zealand Cricket Council because of a dispute over payments.

Turner went into self-imposed exile from the international game in 1977 before returning in 1983.

"The attitude in New Zealand at the time in regards to professionalism was they were opposed to it.

"I was quite aware of his views on that and being that strong sort of character that you describe meant that he made no secret of it.

"But it wasn’t a matter of clashing with him. But obviously in the background he made his views known."