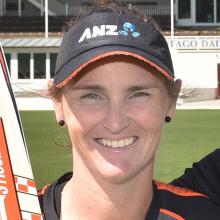 Katey Martin
Katey Martin has played roughly a billion or so games for Otago but will have to wait another year to play her first international in Dunedin.

The 2021 Women’s World Cup was postponed until 2022, the ICC announced on Saturday.

The tournament is being staged in New Zealand. Martin and fellow long-serving Otago player Suzie Bates have waited their whole careers to play an international in their home city.

A scheduled twenty20 match against South Africa in February this year was abandoned without a ball bowled.

The White Ferns were scheduled to play a World Cup fixture at the University of Otago Oval on February 9.

But with the tournament delayed by a year, Martin and Bates will have to wait a little longer.

"I was just talking to Suzie this [Saturday] morning that we have another year to wait. But we’ll be all right, we’ll get there," Martin said.

The 35-year-old wicketkeeper-batsman made her debut for the Otago Sparks in January 2002 as a 16-year-old and has played 160 one-dayers and 81 T20 matches.

She has also played one test, 77 one-day internationals and 82 T20 games for her country.

"I’ll hang in there another year," she joked.

"We’ve got the World Cup being played here and potentially the T20 World Cup in South Africa and Commonwealth Games, so it is going to be a pretty big year of cricket."

Martin said the White Ferns’ tour to Australia in September had been confirmed so that was something more immediate to look forward to.

"What we're all about is staging the best possible World Cup and, when you look at the situation around the world and the ability for teams to qualify and train and compete in what has to be their pinnacle event, delaying it a year just makes sense to have the best possible product," Nelson said.

"We're dealing with a pretty unprecedented global time but it is the right thing for cricket."

Nelson plans to meet her organising team this week to work out what implications the 12-month delay will have.

Australia will host this year's postponed men's T20 World Cup in 2022, while India will retain the 2021 tournament.

Before the pandemic, Australia was scheduled to host the Twenty20 World Cup in October-November.

Otago teams will have greater access to the University of Otago Oval this season.

Four Women’s World Cup games were scheduled for the venue which would have removed the ground from the domestic calendar for a significant stretch of the season. — Additional reporting RNZ