Dunedin rider Ray Dunstan notched a double at the national road championships in Hawke’s Bay over the weekend.

Dunstan lined up in the 60-64 age-group and won the time trial over 17km on the first day of racing near Waipukurau.

Dunstan completed the event in 23min 36sec, more than 1min clear of Wayne Attwell, of Hamilton.

Dunstan backed it up the next day with a win in the 66km road race. He competed the race in 1hr 50min 21sec, 9sec ahead of Andrew Seager, of Auckland.

Dunstan had not finished better than fifth in his previous outings at the national age-group road championships.

However, he ramped up his training under the guidance of former world champion and Commonwealth Games gold medallist Greg Henderson.

“I was training for the worlds in Canada and had planned to use this event as qualifying.

"I have been working with Greg which has been good," Dunstan said.

“I went off the front and had some fun on attack.

"I spent a long time out there on my own but got caught with 15km to go and thought that was it.

"With 3km to go I had another crack and opened a bit of a gap and managed to hold them off."

In the under-17 time trial, James Gardner was pipped on the line by Jonathan Fish, of South Canterbury.

Both riders recorded the same time of 22min 59sec for the 17km but Fish finished just in front to take the title.

She finished third in the 66km road race. 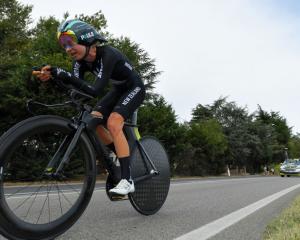