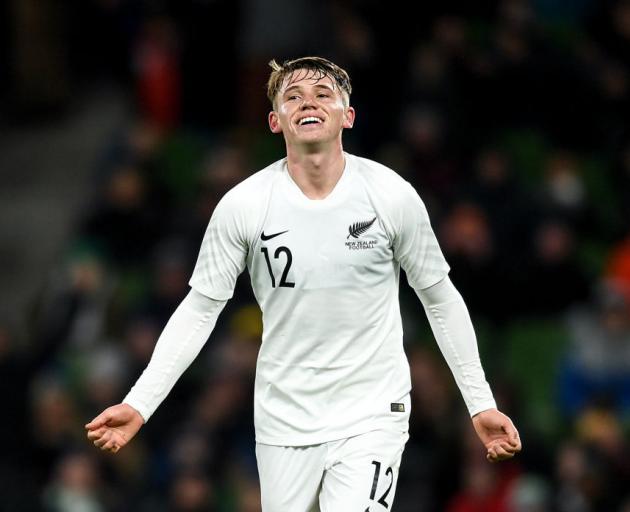 Callum McCowatt of New Zealand celebrates after scoring the opening goal. Photo: Getty Images
The start of a new All Whites era has ended in defeat – but with plenty of positive signs about the future.

New Zealand actually led for 15 minutes in the first half, but ultimately went down 3-1 in the Irish capital, as the home side finished strongly.

The scoreline was probably an accurate reflection of the amount of chances created, but the All Whites will be disappointed they didn't capitalise on their excellent work in the first 40 minutes.

Phoenix midfielder Callum McCowatt opened the scoring after half an hour, but the Irish equalised just before halftime, before two well taken goals in the second half.

Captain Winston Reid got through 45 minutes, and looked strong, and the team lost some defensive shape in his absence in the second half.

Still, there were things to like about the performance, particularly their ability to retain the ball and make inroads in the attacking third.

Coach Danny Hay has repeatedly talked this week about 'Rome not being built in a day', but there were some good foundation stones laid in the famed stadium. It's clear the way this team wants to play, and there were some tasty moments, particularly in the first half.

But they were also loose defensively at times, and fortunate not to be caught in transition more often.

Wood passed a pre-kickoff fitness test to play and there were good early signs. Elijah Just and McCowatt, two kids on debut, combined well to make inroads down the left but couldn't quite find Wood. Ryan Thomas and Sarpreet Singh were getting on the ball, Joe Bell was everywhere he needed to be behind them and Reid was back and controlling the backline well.

Reid hadn't played a competitive match for West Ham for 622 days, after an awful knee injury and then some secondary issues, but had been confident about playing this match. He was moving well, and showed his passion in an early confrontation with young Ireland and Spurs prospect Troy Parrot, who had caught him late.

Thomas, who came of age in the Peru playoffs two years ago, particularly the home leg, again showed his class against high level opponents and was probably New Zealand's best. One searching ball set Storm Roux free down the right, and his cross just failed to find Wood.

There were other half chances, with a run deep into Irish territory, before the All Whites opened the scoring with a peach of a goal. Some crisp passing on the left culminated with Thomas releasing Liberato Cacace, whose well placed cross was neatly finished in the far corner by McCowatt.

It was a touch of class by the Phoenix youngster, who is yet to score for his club but has a goal for his country. That moment stunned the modest crowd inside the Aviva arena, as well as the large contingent of local journalists and media.

The home side had to respond and carved out four good opportunities over the next 10 minutes, with the Sean Maguire going the closest with an angled header just wide of the far post.

Just as it looked like the All Whites would take the lead into the break, they conceded from a corner in the 45th minute. Though it was a well delivered set piece, it was a soft goal in the circumstances, especially as the team had defended so well for much of the half, as Derrick Williams rose between Cacace and Wood.

Ireland's second goal, just seven minutes into the second half, was even more disappointing. There was an element of bad luck, as McCowatt was clearly fouled in the lead up, before the ball was smashed home from the edge of the area by Maguire. But the All Whites were guilty of stopping and expecting a whistle, and as they switched off Maguire got free.

Thomas forced two good saves from Kieran O'Hara in the Ireland goal, but the home side went closest, with Marinovic making an excellent block with Maguire bearing down one on one.

But the third eventually came – moments after New Zealand had made two replacements – with Callum Robinson stealing in front of Roux at the far post.

There were further chances to both teams, with Tuiloma and Elliott Collier going close for New Zealand, before the match wrapped up in chilly conditions.