Green Is marches on with 6-1 rout of Q'town 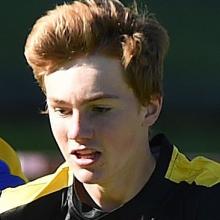 Weston Bell
Green Island continued its surge towards the southern football championship title with another emphatic victory over one of its main challengers.

Queenstown generally does not travel well and so it proved at Sunnyvale, when Green Island romped home 6-1.

Matt Brazier set Sunnyvale alight with a first half hat-trick, with goals on 26, 33 and 45 minutes.

Luke Dennington scored an own goal on 51 minutes making it 4-0.

Jan Kumar pulled one back with 15 minutes left.

Wanaka also carried on its winning way and moved into mid-table safety with a 6-0 victory in Invercargill over Southland.

After six minutes, Weston Bell's well-struck free kick from 22m out found the bottom right corner of the net.

Wanaka made it 2-0 when Steve Pleskun scored from an acute angle in the 36th minute.

A minute later Southland was 3-0 down, when Thomas Van Hees won the ball at halfway and then drove forward, beating two challenges.

He found himself one-on-one with Southland's keeper and drove his shot high into the net.

Pleskun found the net again after great build up play from Toa Roode in the 60th minute to make it 4-0.

Harry Grimsdale was next to get in the action, as he earned a penalty and converted with authority in the 65th minute.

Then Grimsdale scored again when he ran on to a well-weighted long ball from centre back John Skilton and calmly finished under the advancing keeper to make it 6-0 on 77 minutes.