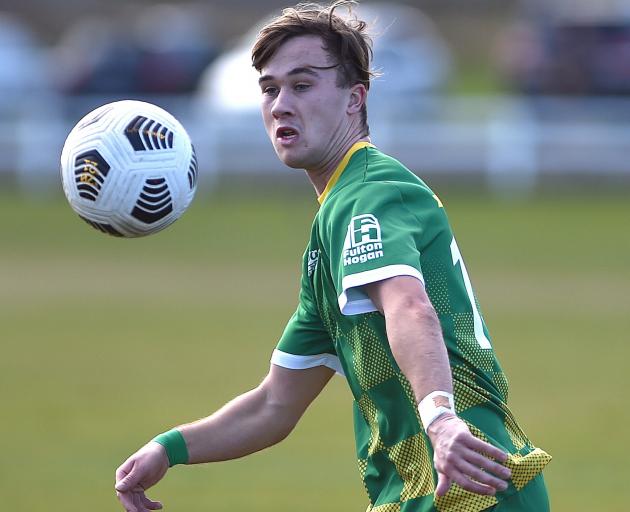 Green Island gave up two late goals to slip to a 4-2 loss to Nelson at Sunnyvale in the Southern League yesterday.

Both teams were searching for their first win, Nelson having travelled to Dunedin for the second consecutive weekend.

Nelson had the better of the early stages and deservedly took the lead on 19min, when Josh Croswell combined with Ross McPhie, and McPhie slipped the ball past Luke Schaffer-Swann.

Green Island burst into life late in the first half, creating many opportunities and chances.

Matt Brazier was flagged for offside as he was about to shoot and Cody Robinson’s diving header flashed narrowly past the post.

Robinson then provided a great ball through for Brazier, who was only denied by a last-ditch tackle.

Within moments of the restart, Green Island equalised, following great link-up play from Cam Anderson, who squared a ball to Adam Hewson to tap home.

The home side was reduced to 10 men when Matt Mitchell was sent off with a straight red card following an all-in scuffle.

It looked as if Green Island might hold on for a deserved share of the points with 10 men, especially after Schaffer-Swann pulled off a stunning double save.

However, moments later, a defensive error handed Nelson the lead, Will Tucker making no mistake.

Anderson restored hope for the home side when he equalised with three minutes left, with a delicate lob over the keeper.

Otago University, hindered by a delayed flight and rescheduled kick-off, was beaten 3-0 by Coastal Spirit in Christchurch.

Kenshin Hiyyashi gave the Spirit a 2-0 lead on 12min, and Treye Butler added the third in the second half.

The South City Royals slipped to a 2-1 loss to Selwyn in Dunedin.

Ollie Petersen gave the Royals the lead after 14min but Selwyn equalised 7min later through Luke Blackie, and scored a second just a minute after that.

Despite both teams losing, they remain tied in third place.

Cashmere Tech remains top of the table after a come-from-behind win over Christchurch United.

United led 2-0 after 50min with goals from ex-Dunedin players Ollie Colloty and Eddie Wilkinson, but Cashmere scored three goals in the last 20 minutes, a Jacob Richards effort in the final minute claiming all the points.

In the local championship, Northern’s resurgence ended at the final hurdle with a 5-2 loss to Mosgiel.

Mosgiel took an early lead with a classy finish from Rahan Ali and a nicely worked goal from Rory Findlay.

Northern, made of sterner stuff these days, responded with a quick brace from the skilful Aljulanda Al-Mawali.

Mosgiel regained the lead on the stroke of halftime with Matt Kelly’s composed effort.

A Cody Brooks long-range rocket left the otherwise faultless Zane Green with no chance, to make it 4-2, and Rhys Quarrell outpaced the defence and Green to score from a tight angle to claim all the points.

Roslyn-Wakari beat Wanaka 1-0 at Ellis Park, Dylan Edwards firing home from inside the box on 52min.