Murray plays it cool on way to win 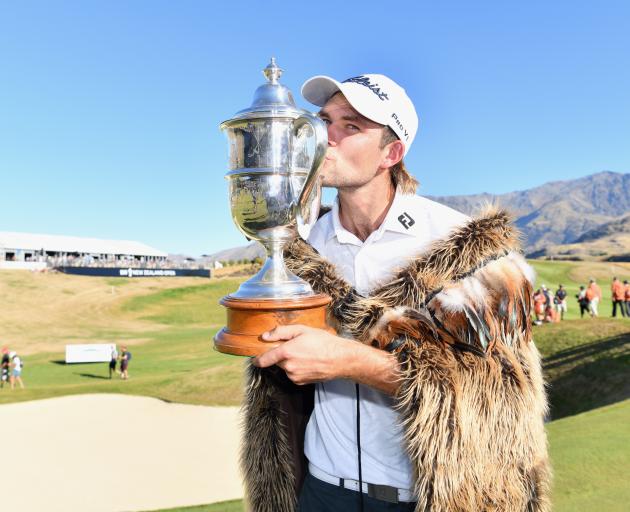 Zach Murray, of Australia, kisses the Brodie Breeze Challenge Cup after winning the New Zealand Open at The Hills in Arrowtown yesterday. Photo: Getty Images
This professional golf is a walk in the park for Zach Murray.

Just over three months into his career and playing his sixth tournament as a professional player, Murray (21) won the New Zealand Open at The Hills in Arrowtown yesterday.

Murray won by two shots, ahead of Josh Geary and Ashley Hall, and had led the tournament at the end of every round. He scored 21 under for the 100th NZ Open and hit a four-under 68 yesterday.

He began one shot ahead at the start of the fourth round yesterday but was caught by Geary after the first hole.

It did not rattle him and the tall Victorian stayed calm and came back to birdie the second hole.

His round stayed accurate and he was finding the fairways often enough. An eagle on the short par five 13th gave him a real lift and as Hall found the rough ahead of him, Murray stayed focused. He also birdied the 14th and 15th holes, both par fours, matching his playing partner Geary, and going into the final hole Murray was three shots ahead.

The last hole was not great - he sprayed the ball right off the tee and had to have a drop. From that drop, Murray pushed the ball well past the 18th green.

But he chipped well back on to the green and two-putted for a bogey.

Murray was sprayed with champagne as friends raced on to the green as he won the Brodie Breeze Trophy for winning the Open.

As he has been at every turn this week, Murray was relaxed and calm as the celebrations began.

After the victory, he said he just wanted to stay strong and positive.

"The mindset was just to stay aggressive. I knew all the guys behind me were going to be at their absolute best to chase," he said.

"I was only leading by one and that can change very quickly."

The key to the win was the victory he gained as an amateur at the West Australian Open late last year.

"Obviously it is a larger event but it's the same principles. Keep making birdies and giving myself chances. And I did that all day. I don't think I missed a green all day which is pretty good."

He intended to come back and play at the tournament for the rest of his life.

He is the first player to lead the tournament the whole way since Bob Charles in 1954. In Murray's other win in West Australia he also led the whole way. He said the lack of scoreboards on the course helped him relax as he did not know where he was placed.

For the win he gained more than NZ $220,000, and he also won the pro-am competition with partner Scott Heitkamp, of the United States.

He admitted nerves were at him at times yesterday.

"But I'm just really lucky to have good people around me. My caddie and my girlfriend, they were staying with me this week and I'm lucky in the way they ground me. When I come home I don't talk about the round or anything. It is nice and easy.

"I've got a good poker face. But I was nervous the whole day. The most nervous I got was before I three-putted. I don't know why.

"I had a few butterflies in the belly. But I said to myself, `right, I've got to calm myself down here'."

The was another Australian victory in the Open and Murray surged up to second on the Australasian Order of Merit, behind Ryan Fox.

The top amateur was Jang Hyun Lee, of Korea, who scored 11 under and was tied for 23rd.