Hockey: Quake not going to be used as excuse 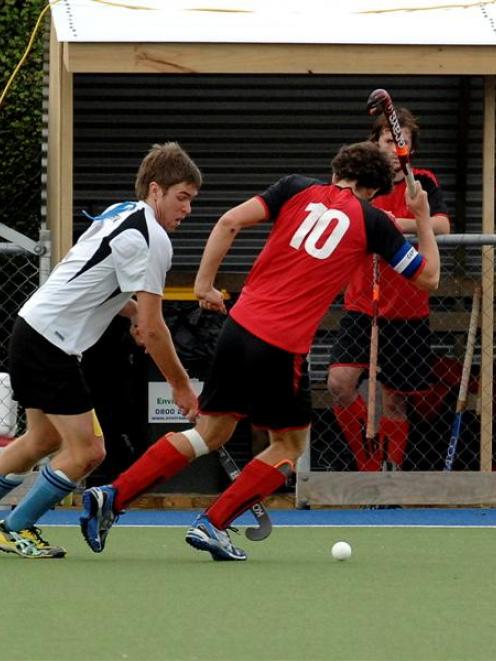 Northern player James Coughlan (left) and Canterbury skipper Tom Loudon jostle for possession as Canterbury players look on during the national under-21 tournament yesterday. Northern won 5-4. Photo by Linda Robertson.
Before the Christchurch earthquake struck, Canterbury under-21 hockey hopefuls were focusing on sticks and speed and on trial matches at the end of February.

Instead, they found themselves in the same situation as the rest of Christchurch. What seemed important no longer took priority.

Two and a-half months later, both the men's and women's teams are competing in the national under-21 tournament in Dunedin.

Canterbury under-21 men's captain Tom Loudon (20) said the earthquake made it very difficult on all the players trialling for the team. He said the training they had done before the earthquake was a waste of time.

"It was not the ideal situation," he said.

The team finished second at the tournament last year and would not be using the earthquake as an excuse this year after a slow start, Loudon said.

The side lost its first game to Capital 6-1, and was only able to take away one point from its game against Southern, which it lost in a penalty shootout.

Vice-captain George Enersen (20) said it was a big decision for some of the players to commit to the team, with many having to attend night classes and 6am trainings because of the disruptions at the University of Canterbury.

Benjamin Radovonich (17) was one player who had made a big commitment.

His school, Christchurch Boys' High School, was damaged during the earthquake and he now attends school in in Auckland.

But his commitment to Canterbury never left.

"I was born in Canterbury and I wanted to play alongside my mates," he said.

Team manager Max Enersen said it had been a difficult time for the team, with some real psychological issues.

"Many of the team lost their homes and others helped people in Christchurch who had their lives disrupted," he said.

"Just seeing the city they live in, in such a way, has an effect on their minds."

Even with the slow start, Enersen was still hoping the team would be able to win the tournament.

"We want to bring something back to Christchurch."