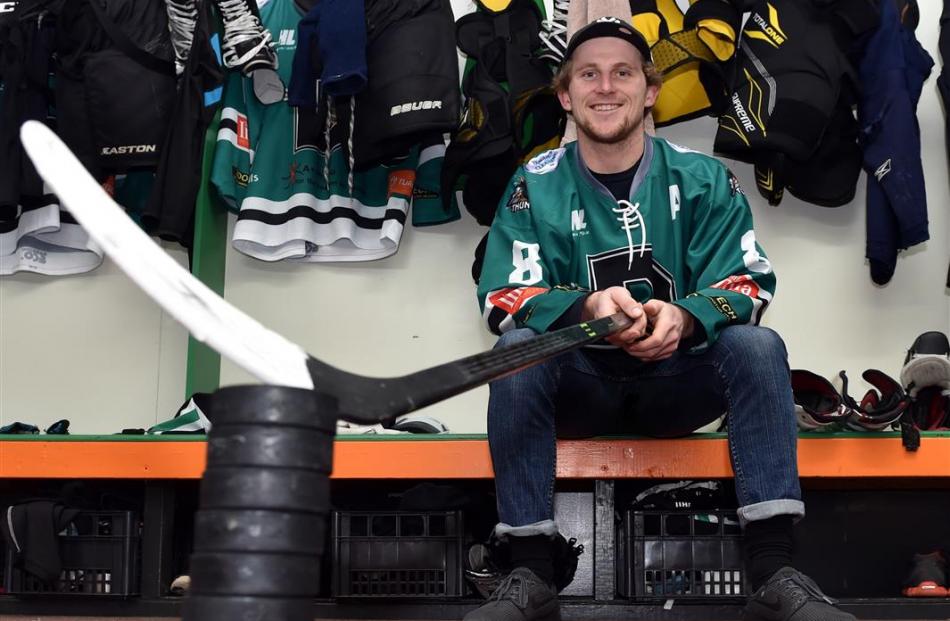 If Dunedin Thunder and Ice Blacks player Connor Harrison gets through the first quarter of today's season-opening national league match against Canterbury in Christchurch, he will already have done better than last season.

The 22-year-old, who has been involved in the New Zealand Ice Hockey League since 2008 and joined the Thunder in 2013, suffered a season-ending shoulder dislocation just five minutes into the side's first game last year.

The injury ruled Harrison out of the Ice Blacks team for the world championships in Mexico earlier this year, and it was not the first time he had been sidelined with shoulder issues.

He had his left shoulder reconstructed six years ago after picking up the same injury he did last season, and has also torn the AC joint in his right shoulder.

After surgery and a long period of rehabilitation, Harrison, who is already a veteran in the Thunder squad, despite his young age, is finally ready to go.

The Thunder's leading goal-scorer in 2014 turned out for the side's pre-season matches and felt he was getting back to his damaging best.

"It's healing really well,'' he said of the injury.

"The surgeon did a really good job of it and I've had some physio and I'm really happy with how it's coming along.

"I'm getting the confidence back just to start playing a bit more physically again.''

Being physical was a big part of Harrison's game.

So, despite a bit of uncertainty, there were no compromises when he hit the ice on his comeback.

"It was kind of straight into it.

"My first game back, I didn't really have a choice. I just jumped out there and started playing and it was like it had never happened, but there are still a few things I'm getting used to again, which is pretty standard.''

The Thunder had only five players returning from last season so there were plenty of new faces in the 29-man squad.

But Harrison, who has taken on a leadership role with the side, said there were some exciting players in the mix.

"There are a lot of young guys who are going to be having their breakout seasons, I think.

"They're showing a lot of skill and talent and a lot of confidence, especially in the last couple of pre-season games.

"They've really stepped it up and shown that they want to be here and want to be playing at this top level, so it's quite exciting.

"I guess the overall goal is to win the championship at the end, but we're taking it one step at a time.

"We've broken it down into smaller goals first and then, eventually, we'll hopefully arrive at the final.''

There was drama before the season, when Estonian goalkeeper Villem-Henrik Koitmaa was denied entry into New Zealand.

That has left the side without a regular starting goalkeeper for its first double-header and the side still hoped to get the player to Dunedin.

"We're definitely looking for someone who can start our games for us and just teach the other guys a lot.

"I saw him play back at the world champs in 2012 in Iceland, and the Estonian national team's pretty good.

"They're all professionals and he'd definitely be a really good asset if we could get him.''