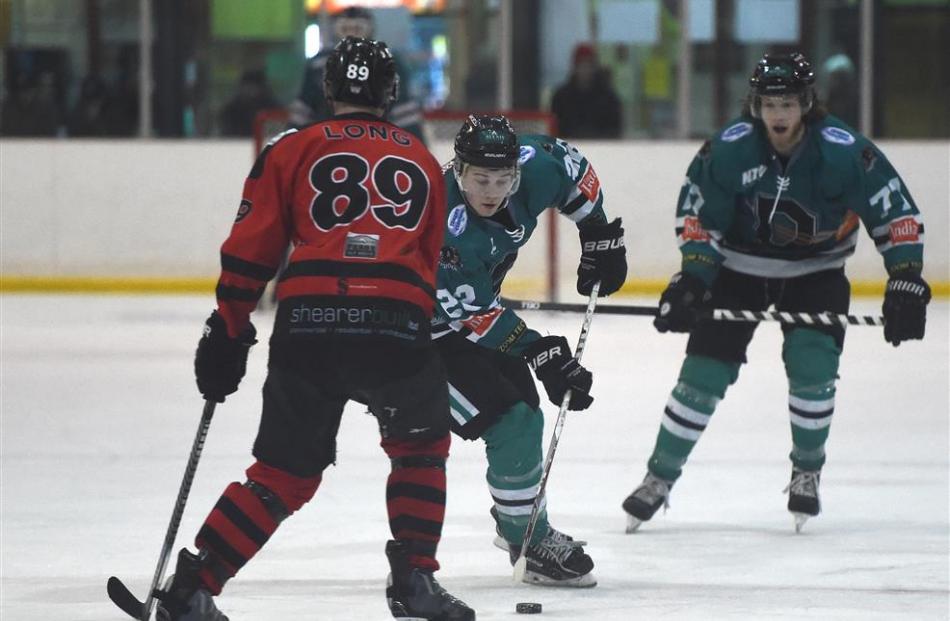 Shaun Harrison, of the Dunedin Thunder, looks to beat Ciaran Long, of the Canterbury Red Devils, as Joel Scott lingers in support during a national league match at the Dunedin Ice Stadium yesterday. Photo by Gregor Richardson.

The Dunedin Thunder has been consigned to the role of spoiler but it was Canterbury that spoiled the home side's party as it came back from 4-0 down to secure a 7-4 win at the Dunedin Ice Stadium yesterday.

The Thunder lost both matches of its home double-header against the Red Devils this weekend but yesterday's loss was particularly disappointing for the bottom-of-the-table side.

It claimed a 3-0 lead in the first period and extended that to 4-0 early in the second before Canterbury gradually clawed its way back into the match and then took control.

It was the Thunder's 13th loss in 14 matches this season and was frustrating for a decent crowd that thought its side was on the verge of a confidence-boosting win.

Thomas Carson-Pratt opened the scoring somewhat against the run of play in the 10th minute when he got on the end of a nicely executed pass from Gints Leitis.

With several players involved in a massive brawl while the puck sat preciously close to the Canterbury goal, those who were still interested kept playing and Leitis squeezed the puck in to give Dunedin a 2-0 lead.

Ryan Gruszka scored the Thunder's third when he got on the end of an assist from the impressive Leitis towards the end of the first period.

The Latvian import scored his second early in the second period as the Thunder looked to put the game beyond the visiting side.

But the goals then started coming for the Red Devils, who kept their finals hopes very much alive with a much improved effort during the rest of the match.

It looked to have more control in the first period and strung more passes together but was not able to create enough goal-scoring opportunities.

That changed in the second and third periods, however, as it began to find the sort of form that has put it in second place in the competition.

With one round remaining, the Red Devils are now in prime position to join the Southern Stampede in this month's finals series in Queenstown.

Meanwhile, the Stampede's last home games of the New Zealand Ice Hockey League season turned rowdy at the weekend as it took on Auckland's Botany Swarm at Queenstown Ice Arena.

It secured a 4-3 win on Friday but suffered a 3-2 defeat on Saturday in games coach Adam Blanchette described as tough and intense. Brawls on both nights resulted in forward Jade Portwood being sent off the ice. Mr Blanchette said the frustration on the ice was because the referee lost control of the game.

"The whistles kept coming and neither team could get a flow going. As they did, frustration built and things got a bit out of control. At the end of the day, it is the ref's job to keep the game under control."

While he was not happy with how "things went down'', he said it was nice to see the team sticking together on the ice.

"The fact it had to get to the point where it boiled over - that is unfortunate.''

Despite both games being overshadowed by penalties and misconducts, he was happy with their performance and said it was great to see captain Matt Schneider back on the ice after a three-week break due to injury. He did not disappoint, securing a hat-trick on Friday.

The Stampede sits at the top of the table on 37 points and has already secured a home finals playoff.

It travels to Auckland this weekend to take on West Auckland Admirals.