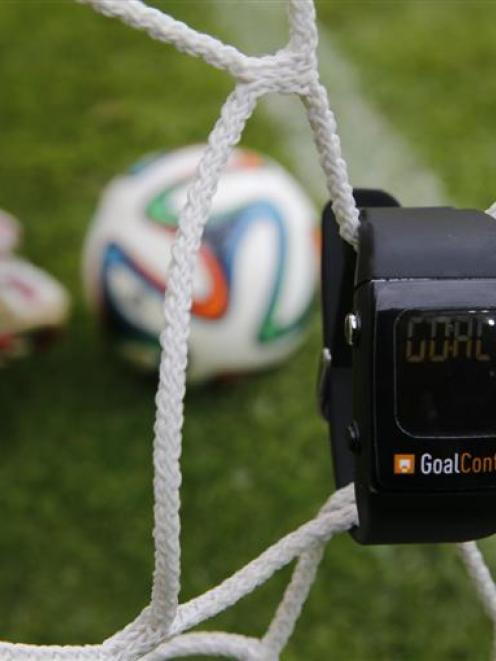 A GoalControl watch reads ''goal'' as a football rolls fully behind the goal line during a demonstration in Aachen, Germany, yesterday. The technology to be used at the World Cup in Brazil starting on June 12, uses 14 high-speed cameras around the pitch. The watch will be worn by referees and will display the word ''goal'' together with a vibration alert within one second, if the ball has fully crossed the goal line. Photo by Reuters.
Imagine a parallel football universe where Arsenal was the champion, and Manchester City was a miserable seventh.

Mixed blessings, right?Anything is possible when you get a bunch of football fans to hold a mock draft that redistributes the world's best players (and Kyle Walker) into the 20 English Premier League teams, then simulate a season with the Fifa 14 video game.

Yes, we've gone and done it again. Two years after the glorious waste of time that was the inaugural ODT Big Draft, part two has arrived.

This time, we managed to find 20 individual fans, one for each club, who took part in an epic 11-round draft.

Like last time, a random draw determined the draft order for the first round, and we went in ''snake'' fashion thereafter. It took about two weeks and was conducted via email and text message.

The first pick, as it was in 2012, was utterly predictable. Aston Villa took Barcelona superstar Lionel Messi.

Everton fan Le Comte, as he did last time, went WAY outside the square with the second pick, plumping for fullback Leighton Baines.

At the conclusion of the draft, these are the teams that emerged:Arsenal (4-4-2): Valdes, Gibbs, Mertesacker, Puyol, Maicon, Villa, Pogba, Diego, Gerrard, Suarez, Llorente.

The drafting was the fun bit. Then came the painfully laborious process of updating all the squads on Fifa 14.

Finally, we were ready. The whole season could have been simulated in five minutes but, like last time, we dragged it out to build tension.

A surprise early leader was Everton, with Crystal Palace and Swansea also in the mix. By round 16, Liverpool and West Brom were tied at the top.

Liverpool (naturally) dominated much of the rest of the season. The Reds built an imposing nine-point lead and looked odds-on to push on to victory.

Then it all went pear-shaped, just as in real life. A series of draws led to Liverpool's lead being shaved to a single point with two rounds to play. And there was to be no fairytale finish.

Player of the season was Soldado (Crystal Palace).

Arsenal ''manager'' Nigel Benson, flush with excitement after the Gunners' FA Cup win in real life, made his winning speech:''After nine trophy-less years, Arsenal win the title and the FA Cup in the same week.''

Speaking of the FA Cup, we ran a quick simulation of that after the league campaign.

In the semifinals, Everton beat Norwich 2-0, and Chelsea beat Liverpool 3-1.

In the final, Everton upset Chelsea 2-1.

And that was that. Another ODT Big Draft in the books. Let's wait a while before the next one.

The Sports Pro Media website recently published its list of the 50 most marketable athletes in world sport.

A little odd, right? The rest of the list included such relative unknowns as Nascar driver Austin Dillon (No 25), Canadian ice hockey player Steven Stamkos (No 32) and Brazilian surfer Gabriel Medina (No 43). Our own Sonny Bill Williams made it at No 41.

The company says it bases the rankings on value for money, age, home market, charisma, willingness to be marketed and crossover appeal.

This is the last Last Word. Hold the tears!

The column has run every Saturday, more or less, for nearly six years, which in the modern media world is a lifetime.

Over that span, I hope it has provided readers with the odd chuckle and raised eyebrow, or at least given you a brief trivial escape from the hard news further forward in the paper.

The unofficial count, by the way, is 700 references to Liverpool, 600 mentions of Waitaki Boys' High School (not so many lately) and 350 shout-outs to members of the Meikle family. (On that note, hi Dad! Get well soon.)

Its author is going nowhere, but the column just feels like it has done its dash.

The Last Word once effectively stood alone as a repository for sporting tidbits, trivia and random notes. But times have changed. We now have similarly-styled columns for cricket and for basketball/netball.

Our Friday tabloid regularly contains Last Wordian bits. Paul Dwyer's club rugby column is in a similar vein, even if he makes most of it up. And my old mate at The Wash also dips into sport sometimes.

The introduction of those columns, and the fact we tend to do full stories on most Otago sportspeople who have done anything remotely interesting, has meant my column has often been short on local content and high on ''that American crap'', as more than one reader has described it.

I will still do regular Big Interviews, and things like my annual power rankings, and even some American stuff. And look out for a few new projects, and maybe even the return of an old segment.