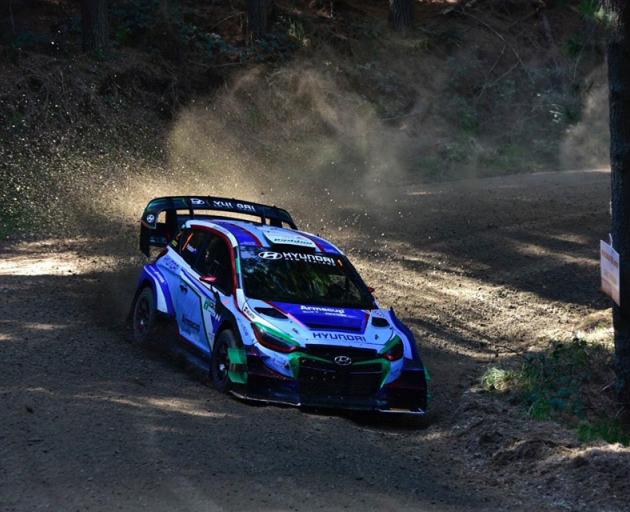 Competing in his Hyundai i20 AP4 in full go-fast spec at his Ben Nevis Golden 1200 Hillclimb this weekend, will be a welcome break from event management duties, for Hayden Paddon, this weekend. PHOTO: ALLAN PRITCHARD.
After competing in hundreds of motorsport events all around the world, Hayden Paddon has a fair idea about what he expects from a good one.

This weekend in Central Otago, all of that experience has been funnelled into his debut foray into event organising.

Ninety entries made up of motorbikes, super quads, cross karts, cars and a handful of hillclimb beasts will roar up the 6km Ben Nevis Golden 1200 Hillclimb tomorrow and Sunday.

The Cromwell-based former WRC rally driver said he had designed the event, which spectators accessed from the Nevis Rd in Bannockburn, with his "competitor hat on".

"What do I like from events? I’ve tried to create an experience for competitors."

The winners in different classes will be decided on the best run time from Saturday and fastest run from Sunday added together.

He said this format rewarded consistency rather than the shoot-out style elimination runs hillclimbs tended to favour.

Paddon believed there were about about six candidates in the mix.

In the 700hp to 800hp vicinity are Rotorua’s Sloan Cox, who is bringing his Mitsubishi Evo 8 hillclimb special down from Rotorua, and Tony Quinn, who will roll his Ford Focus out of the Highlands Motorsport park garage.

Waimate’s Ben Terry has a big hillclimb power plant in his Mitsubishi Evo 3 and Job Quantock, of Kaiapoi, is no slouch in his Skoda AP4 rally car.

Also, never discount Ashburton-based, expert Superquad-wrangler Ian Ffitch as he has what it takes to howl up many a national hillclimb and on to the podium.

Fellow top-five contender, Alex Kelsey is now a no-show, as damage his Peugeot MC2 incurred at a recent event could not be repaired in time.

After the logistical challenges of getting an event up and running in four months; the added pressure of a bulging entry list and the hillclimb road being damaged by flooding recently, Paddon has not even had time to think about his own drive.

His team is under instructions to get the car ready and once it is on the start line "that will be my time off during the event".

Ben Nevis Hillclimb: what you need to know

•Getting there: Access is to the top of the stage (finish line) 14km up the gravel Nevis Rd and must be accessed from the Bannockburn end.

•Spectator access: There are three car parks available. Car parks two and three are only accessible at designated times as indicated by the marshalls. For flexibility, stay parked at car park one, and walk down the hill. If you park in car park two and three during the day, you can not exit until the end of the day about 5pm.

•Food trucks are available at each spectator area.

•No walking on the road and only cross the road at sign-posted spectator crossings.

•No cost but there is a link available on the website for donations.