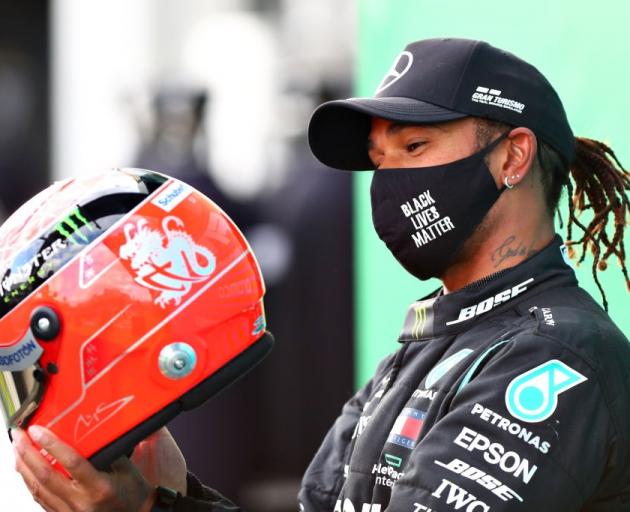 The Briton, heading for a seventh title and set to become the sport's most successful driver of all time after his Eifel Grand Prix victory at the Nuerburgring, said his achievement would take time to sink in.

Schumacher's records once seemed sure to stand for the ages, with some doubting they would ever be beaten, but only a brave punter would bet against Mercedes driver Hamilton reaching 100 wins and more.

"I don’t know how it is for other drivers when they have these wins but it takes some time for you to analyse it and for it to sink in, to realise what it actually means," said the 35-year-old.

"Like all of us, I grew up watching Michael win all of those grands prix and I couldn’t have fathomed equalling him.

"I think getting to Formula One was the first step of the dream and obviously emulating [Brazilian triple champion] Ayrton [Senna]. But Michael was just so far ahead.

"It’s beyond my wildest dreams to think that I’m here today having equalled him and I just feel really humbled by the moment and the opportunity I was given when I was 13 by Mercedes."

The win was not the only milestone Hamilton reached on Sunday (local time), with the Briton also stretching his records for successive points finishes (44) and most podiums (160).

Hamilton said winning did not get easier, even if luck was on his side on Sunday with team mate and closest rival Valtteri Bottas retiring due to a power unit problem, and it had not been easy for Schumacher either.

"What he did at both the teams he was at, particularly Ferrari, was just remarkable," Hamilton said of the Ferrari great, who retired in 2012 after a final stint with Mercedes.

"It’s hard for people to perhaps fully understand how hard it was for him to have got those 91 wins, to deliver weekend in weekend out, year on year, and stay so physically in shape and so precise. I understand that now more than ever.

"I can only tell you that it doesn’t get easier. From your first win to your 91st I’m telling you it’s been a long hard run."