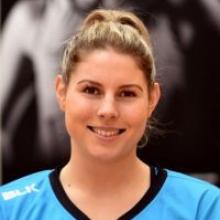 Storm Purvis reflects on her time with the Steel ahead of her 50th match on Sunday. Photo by Peter McIntosh.
Storm Purvis may be only 23, but she is already somewhat of a veteran on the netball court.

The Steel defender will bring up her 50th game for the franchise when her side takes on the Mystics in the ANZ Championship clash at the Edgar Centre in Dunedin on Sunday.

Purvis, who was born in Christchurch, moved to Dunedin from Auckland in 2011 and made her debut for the Steel the following year as an 18-year-old.

She will become just the fourth player to reach the 50-game milestone for the Steel, following in the footsteps of current players Wendy Frew (98) and Shannon Francois (58) and former player Liana Leota (54).

Purvis was told of the impending milestone by her father earlier this week and she said it would be a proud moment.

"I'm just stoked that it's in Dunedin, to be honest,'' she said.

"It's my home crowd; I've spent the past six years here.

"It's a great honour and I think to have played all 50 with the Steel is great, too.

"I love the set-up and the region here.''

Purvis, one of five Dunedin-based players in the Steel squad, was persuaded to head south for playing opportunities by former Steel coach Janine Southby, who was also the New Zealand under-21 coach at the time.

She also headed south to study, but that took a back seat when she was unexpectedly elevated by Southby and her netball career took off.

"I wasn't expecting to make the Steel the following year. I switched from a university focus to a netball focus pretty quickly,'' she said.

"I remember my first game well. It was against the Magic and I came on in the last quarter against Irene [van Dyk]. We actually ended up winning that game and it was really exciting.

Purvis rates that game, along with the Steel's first win on Australian soil in Adelaide in 2014, as her most memorable matches.

"Phoenix [Karaka] and I started and played the whole game together and everything clicked and that felt really good.''

Not surprisingly, Purvis also rates the Steel's unbeaten run in this year's competition as another highlight.

The side has won six and drawn one of its seven matches and has a runaway lead in the New Zealand conference.

Like many of her team-mates, Purvis is not sure what has led to the turnaround by a side which won only three games last year.

"We get asked that question a lot and it's a really hard one to answer.

"I think it's just the experience of another year together. Gina [Crampton] and Te Paea [Selby-Rickit] were starting last year in their first full season in the competition.

She also praised new coach Noeline Taurua, who took charge of the side this year, for instilling self-belief within the squad.

"She really believes in us and thinks that we can win this competition, and that really resonates throughout the team. In the past we said 'we're young, we're developing, our time will come'.

"This year, we're playing like a team that can win and it's all coming together.''

Purvis had undergone a change herself this year, moving from goal keep to goal defence, and she is getting more comfortable with that adjustment every week.

She will be one of the last players to bring up 50 ANZ Championship matches, given this is the tournament's last year.

She said it was sad to see the tournament end but was excited for the reintroduction of a national championship.

As for her options next year given the lucrative contracts likely to be on offer in the Australian national league, Purvis was giving little away.

"I haven't thought much about it yet and I'm loving the way the team's going.''

Meanwhile, ticket sales are going well for the match.

Netball South chief executive Lana Winders said more than 2000 tickets had already been sold, with the venue holding a capacity of about 2600.

Ticket sales for the Steel's only other match in Dunedin, against the defending champion Firebirds on June 11, had also been steady, she said.