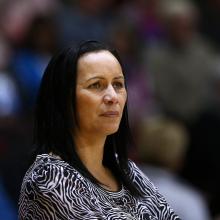 Reinga Bloxham. Photo: Dianne Manson
Relief was the initial feeling in the Steel camp when news filtered through the ANZ Premiership had been postponed for two weeks.

The thought of playing in empty stadiums while potentially being exposed to Covid-19 was not appealing at all.

It was not so much playing the game which caused concern. The anxiety instead came from having to travel and spending time in public spaces.

But that tension eased yesterday with Netball New Zealand’s decision to put the tournament into a hiatus due to the coronavirus pandemic.

The decision was made following the New Zealand Government’s announcement on Thursday regarding restrictions on mass gatherings.

It will take effect immediately, meaning rounds two and three will have to be played at a later date.

Netball New Zealand chief executive Jennie Wyllie said the decision has been made due to uncertainty and a desire to protect the welfare the players, staff and volunteers.

“We will continue to monitor the situation in New Zealand and follow the information and consultation with the appropriate channels,” Wyllie said.

“We understand it is disappointing for all of those involved and our fans, but safety is our top priority.’’

The announcement also affects the Beko Netball League and Netball New Zealand has opted to suspend the competition at this time.

The decision on when to return to play will be reviewed later this month. But the plan is for the ANZ Premiership to resume from round four.

‘‘It is a pretty big call to make a decision like this but ultimately I think it is the right call,’’ Steel coach Reinga Bloxham said.

‘‘We had a chat together about the decision which had been made and [by] just the look on the players’ faces I could tell that they are definitely backing the decision.’’

The Steel will take the weekend off but next week ‘‘we'll have to try to carry on as best as we can’’.

‘‘We’ve got some strength and conditioning to do through the week and then we’re hoping we can meet and have a team training as well.

‘‘At this stage there is no restrictions on that for us. However, it will depend on whether stadiums and things like that stay open.’’

Bloxham said the players and staff had been involved in the discussions and felt their voices had been heard.

‘‘I know through the conversations I’ve had with players that they all felt that they were consulted in the move forward. And I think Netball New Zealand has tried to keep us all in the loop as quickly as possible and that has been helpful as well.’’